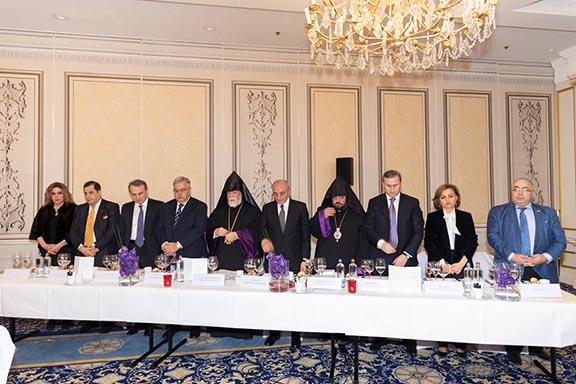 On 15 November 2019, the Armenian Revolutionary Federation’s (ARF) media outlet Asbarez wrote an article titled “Two to Dump”. Two topics were mentioned in the article; firstly, it was underlined that the Minister of Education, Science, Culture and Sports of Armenia Harutunyan should resign and secondly, it was emphasized that US Parlamentarian Eddie Bernice Johnson ‘should be denigrated’ for criticizing the alleged Armenian genocide resolution.[1] The common ground of the two topics that are combined in a single article are, as always, extremism and “Turcophobia”.

The article explained the necessity for the Minister’s resignation as follows: It was highlighted that Armenia is not like western states and is a small “nation-state” that has suffered a genocide and that this is why Armenians have more need for aspects that make a nation. This attitude, which involves extremism and radicalism, brings the Nejdehism ideology to mind.

Again, in the same article, US Parlamentarian Eddie Bernice Johnson’s criticism for the alleged genocide resolution was evaluated with an extremist and separatist discourse; it was stated that the Parliamentarian was African-American, that he is a “slave descendant” and that the alleged genocide resolution should not be criticized. Moreover, due to this act of the Parliamentarian, the US Armenian diaspora was called on to support the candidate opposing the aforementioned Parliamentarian, it was stated that he should not be appointed again and emphasized that the Parliamentarian should be “denigrated”. On 15 November 2019, a statement of the ARF was also published in the Dashnaksutyun’s media outlet Asbarez. In the statement, the Armenian goverment was criticized for repressiveness and their actions were characterized as “oppression”.[2] These populist, radical, dangerous and Armenian government-opposing discourses create the impression that the ARF will not settle down.

Once again, according to Asbarez’s news report of 15 November 2019, in an event organized in Brussels in 9 November 2019, 2,4 million Dollars of financial aid was made to the ARF. Reverends such as Aram I and self-proclaimed so-called Nagorno-Karabakh Armenian officials also participated in the event.[3] During the event, along with explaining the activities of the ARF in various parts of the world, the efforts made towards the recognition of the alleged Armenian genocide in the international sphere were mentioned. The necessity for the young Armenian generation to work for the “Armenian Cause” was adverted and the Nagorno-Karabakh issue was discussed under this “Armenian Cause”. Reverends also being a party in a political event is a clear sign of the politicization of religion. Additionally, the members of the ARF have a tradition of branding other members who do not embrace their program as antagonists and, to take it even further, as “enemies”.[4] Within this context, the providing of subvention to this fraction, which has been aspiring to radically govern the Armenian diaspora, is an unfortunate act to say the least and promoting terrorism to say the worst.

All of these developments display that the ARF, the Dashnaksutyun in other words, is increasing its radical nationalism and extremist discourses day by day and is openly aiming to sway the diaspora Armenians as well as the Armenians of Armenia in line with its objectives through populist discourses. This type of swaying and discourses aim to prompt the target groups. Moreover, the ARF still aims to spread Turcophobia across its target group. As is seen from past terrorist actions, the radicalization of the diaspora certainly creates grave danger.

[3] “$2.4 Million Raised by ARF Bureau for Advancement of Armenian Cause”, Asbarez, 15 November 2019 http://asbarez.com/188425/2-4-million-raised-by-arf-bureau-for-advancement-of-armenian-cause/?fbclid=IwAR2SqBBMzqioWLIyJHpNodpo4AEx96xCwbv4TK7Lt0UNDdRBVHgxsUWamqQ