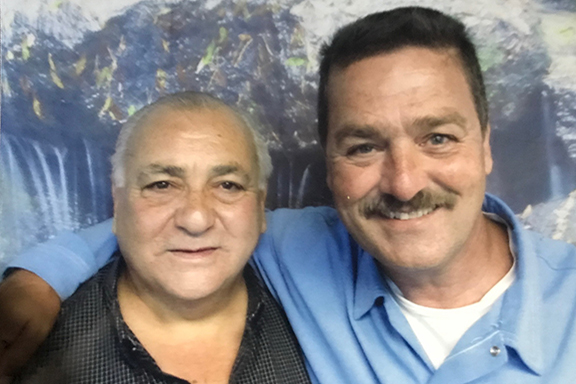 According to the 12 September 2019 news report of Asbarez newpaper, the media outlet of the Dashnaksutyun which is the representative of the radical Armenian views in the US, as part of the religious programme organized on 8 September 2019 by the episcopacy belonging to the Armenian Diaspora in the US named “Western Prelacy of the Armenian Apostolic Church of America”, Rafi Garabedian, a reverend of Armenian descent and the religious official directing this religious programme, privately visited terrorist member of the “Justice Commandos of the Armenian Genocide” prisoner Hampig Sasunyan.[1] According to the news report, due to the situation of Sasunyan being under rough conditions, religious official Rafi Garabedian gave his prayers to provide courage and morale/religious strength.

This visit was published in the website of the mentioned episcopacy of the Armenian Diaspora with a photograph of Garabedian with terrorist Sasunyan.[2] According to the detail in Asbarez’s news report, Western Prelacy has been providing organizations titled “prison priesthood” under the administration of Garabedian and morale/religious counseling to the Armenian prisoners in the prisons in California for 10 years.

There are voluntary constitutions that provide religious counsel to everybody -regardless of race- in the prisons in the US and naturally everybody has the right to freely follow their religion. However, to publish the photo of the terrorist murderer Sasunyan, who murdered Turkey’s Los Angeles Consul General Kemal Arıkan in 1982, with a reverend in the website of the episcopacy of the Armenian Diaspora is a disastrous act. The episcopacy reporting this visit as news can be linked to the hostility of the Armenian Diaspora towards the Turks and Turkey. Moreover, a religious organization making such a post can be interpretted as a provocation for terror.

Another aspect that needs to be questioned is -Armenian or another group, it does not matter- the subject of the special religious counseling service given to diasporas /groups being controllable by the California prisons. It is necessary to question whether or not the language and content of religious programmes are being inspected.