THE SUBJECT OF NAGORNO-KARABAKH IN THE UN GENERAL ASSEMBLY AND THE SUBSEQUENT DEVELOPMENTS
Commentary No : 2019 / 51
Berfin Mahide ERTEKİN
15.10.2019
5 min read 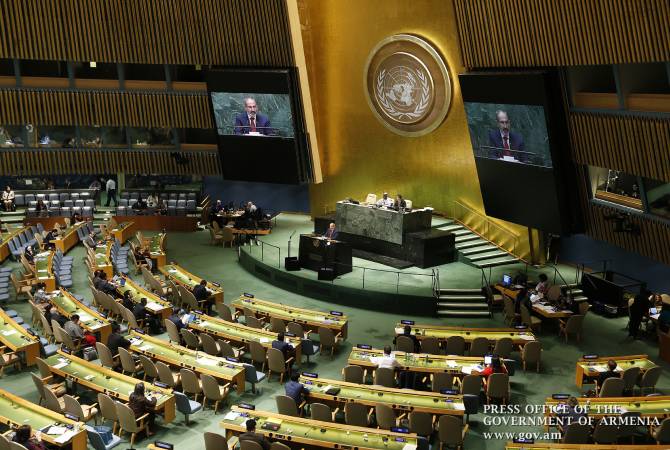 The subject of Nagorno-Karabakh was once again among the agenda items during the 74th Session of the UN General Assembly this year, especially for Azerbaijan, Armenia and Turkey. Armenia approached the Nagorno-Karabakh subject by forming a new discourse.

Armenia’s Emphasis On Nagorno-Karabakh During The UN General Assembly

During his speech in the session, Pashinyan stated that he had expressed from the beginning that the resolution of the Nagorno-Karabakh issue must be applicable for the people of Azerbaijan, Nagorno-Karabakh and Armenia but that, despite these expressions, Azerbaijan is not taking constructive steps and only wishes to deliver a solution suitable for the people of Azerbaijan. Afterwards, presumably with the expectation that he would be honored by the West’s interest and support, Pashinyan asserted a new claim and stated that Azerbaijan wishes to achieve its status during the Soviet era in the Nagorno-Karabakh region. Pashinyan characterized this wish of Azerbaijan as a futile effort, made the statement that the people of Soviet-era “Nagorno Karabakh Autonomous Region” declared their independence and exercise their self-determination as did Azerbaijan seceding from the Soviet Union and continued his speech by expressing that “Azerbaijan’s position is tantamount of claiming restoration of Soviet Union”.[1] Armenia’s UN Permanent Representative Ambassador Davit Knyazyan, who spoke at the 74th Session of the UN General Assembly, stated that “Restoration of Soviet Azerbaijan's 'territorial integrity' is impossible as much as that of Soviet Union”.[2]

Pashinyan, who is maintaining a harsh and radical attitude regarding Nagorno-Karabakh, expressed in his recent speeches that Nagorno-Karabakh belongs to Armenia; in 5 August 2019, Pashinyan stated that “Nagorno-Karabakh belongs to Armenia” during the meeting in the so-called Nagorno-Karabakh Republic’s capital Stepanakert.[3] Pashinyan stating “Karabakh is Armenia, period” during the press conference organized in Vanadzor is another example of Pashinyan’s controversial statements.[4] While the Nagorno-Karabakh region was a region where Azerbaijani Turks were the majority demographically prior to Tsarist Russia’s invasion, after the invasion, during the Soviet era, the region’s demographic structure would change in which the Armenian population would increasingly rise and surpass the Azerbaijani Turks. The Nagorno-Karabakh region was a place that belonged to Azerbaijan before and during the Soviet period. Currently, as a result of the people of Azerbaijan being massacred and forced to flee their homes, the Armenians constitute the majority of the region’s population.

The Issue Of Nagorno-Karabakh In The UN General Assembly

Foreign Minister Elmar Mammadyarov, who made a speech on behalf of Azerbaijan in the UN General Assembly’s 74th Session, expressed that Armenia is misleading its own people and the international community. Moreover, he called on Armenia to give up its aggressive and hostile policy and fulfill its international obligations.[5]

Therefore, the international community has witnessed the injustice of Armenia’s continuing invasion, despite the Decision of the UN General Assembly, and its playing with perceptions by speaking differently at Nagorno-Karabakh and the UNGA.

Russia’s Foreign Minister Sergei Lavrov, who is one of the three co-presidents of the Minsk Group established for the resolution of the Nagorno-Karabakh issue, criticized Pashinyan for describing Nagorno-Karabakh as “an integral part of Armenia”. Lavrov also indicated that such statements hamper the efforts to end the Karabakh conflict.[7] This open criticism of Lavrov and the Armenian administration’s radical discourses and attitudes, which lead to deadlock regarding the subject of Nagorno-Karabakh, have been expressed through official channels.

[1] “We should prove that democratic transformation in Armenia is sustainable” – Pashinyan’s speech at U”, Armen Press, 26 September 2019 https://armenpress.am/eng/news/989447.html

[2]  “Armenian diplomat at UN: Restoration of Soviet Azerbaijan's 'territorial integrity' impossible as much as that of Soviet Union”, Panorama.am, 30 September 2019 https://www.panorama.am/en/news/2019/09/30/Armenian-diplomat-UN/2173901