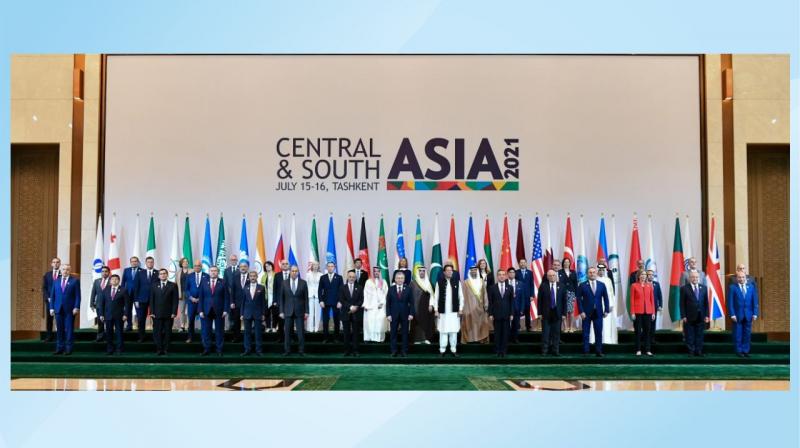 In July, it was announced that the United States, Afghanistan, Pakistan, and Uzbekistan agreed to establish a new quadrilateral diplomatic platform (QUAD) to support the peace process in Afghanistan and strengthen regional connectivity. It was noted that the parties agreed that “peace and regional connectivity are mutually reinforcing,” and that they intended “to cooperate to expand trade, build transit links, and strengthen business-to-business ties.”[1]

This statement on the quadrilateral platform came right after the international conference titled "Central and South Asia: Regional Connectivity, Challenges and Opportunities" that was held in Tashkent. In this widely participated conference, including the Advisor to the President of the United States, the Foreign Ministers of China and Russia, and representatives of international financial institutions, attention was drawn to the role of Afghanistan as a "regional bridge" connecting Central and South Asia. It was stated that it is important to develop the transit and logistics potential of the Central and South Asian regions by expanding the transport infrastructure, and the parties were called to promote the economic development of Afghanistan through the implementation of joint regional projects.

The US-led Afghanistan quadrilateral platform, whose declared goal is the establishment of new regional connectivity, has been compared to the quadrilateral platform that includes the US, Australia, India and Japan (which is considered an anti-Chinese alliance in the Indo-Pacific region) and which was established in 2007. Moreover, the fact that US President Joe Biden stated after the G7 Summit in Cornwall this year that they plan to support infrastructure construction projects as an alternative to China's Belt and Road Project has brought comments that the Afghanistan Quad is a part of this plan.

It can be seen that the US has recently been developing cooperation mechanisms with the quadrilateral diplomacy dialogue strategy. In June 2021, the defense ministers of the UK, Germany, France, and the US came together within the framework of the platform called Euro-QUAD. It is stated that the establishment of a fourth quadrilateral platform - Middle East QUAD, which will include the US, Iraq, Saudi Arabia, and Jordan, is also within the bounds of possibility.

Some authors argue that the Afghanistan QUAD will be more moderate than the Indo-Pacific QUAD in terms of anti-China stance and will not be a military alliance.[2] However, it is noted that the region must be secure and stable for there to be economic cooperation.

It has been observed that the negotiations between these states regarding connectivity projects in the region had started before the QUAD platform. Last year, a delegation headed by the US Special Representative for Afghanistan Reconciliation Ambassador Zalmay Khalilzad and US International Development Finance Corporation (DFC) CEO Adam Boehler visited Tashkent, and it was emphasized that energy, transportation, and communication projects, which will involve Uzbekistan, are extremely important for the establishment of lasting peace in Afghanistan.[3] In February 2021, a joint action plan was adopted for the construction of the "Mazar-Sharif-Kabil-Peshawar" railway.[4] This plan is based on the December 2018 protocol on establishment a joint working group and financial consortium between Afghanistan, Pakistan, and Uzbekistan. In addition to the Trans-Afghan transportation corridor, an agreement was signed regarding the construction of the Surkhan-Puli-Khumri electricity transmission line, which will provide electricity from Uzbekistan to Afghanistan.[5]

Except for the statement of the US led quadrilateral platform that it will support the regional transit projects and that the parties will meet again for cooperation in the coming months, no concrete steps have been taken yet. Meanwhile, it has been seen that Pakistan is also involved in Chinese-backed projects. At the "Central and South Asia: Regional Connectivity, Challenges and Opportunities" conference, Prime Minister of Pakistan Imran Khan stated that regional links also offer potential for investment opportunities with the China-Pakistan Economic Corridor (CPEC) and invited Central Asian countries to join CPEC. Uzbekistan has also expressed its desire to participate in Belt and Road projects through bilateral and regional platforms. It is known that at the Belt and Road Forum held in 2017, Uzbekistan and China signed 115 agreements worth 23 billion dollars to develop cooperation in various fields.[6] China's role in Afghanistan has also evolved considerably over the past 20 years. The foreign ministers of Afghanistan, China, and Pakistan, who met in Kabul on 15 December 2018, had set forth their objectives to advance trilateral cooperation. China has stated that it will support coordination between Afghanistan and Pakistan in energy and connectivity projects, including the construction of the Quetta-Kandahar railway and the Kabul-Peshawar Highway and Railway.

However, the real issue now is what will happen now that the Taliban has taken control of Afghanistan when all the cooperation goals had been agreed with the previous official Afghan government. The fact that DAESH-Khorasan has claimed responsibility for the recent terrorist attacks in Kabul signals that the way for cooperation with the Taliban against DAESH by various countries may open in the coming days.

In this process, Russia has carried out joint military exercises with Tajikistan and Uzbekistan, and the Collective Security Organization exercises in Kyrgyzstan started on 24 August. With Russia maintaining a sanctions regime imposed on the Taliban, it was seen that some contacts were established between Russia and the Taliban in 2015. Maria Zakharova, Spokeswoman for the Russian Ministry of Foreign Affairs, stated that “Russia’s only shared interest with the Taliban is the fight against the Daesh” and “they exchanged some information”.[7]

Considering that Pakistan was one of the few countries that recognized the legitimacy of the Taliban until 2001, it is likely that the parties will be able to establish cooperation in the coming days. India, which is not included in the Afghanistan QUAD platform, has reacted negatively to this situation. Concerned that the Taliban will foster militancy in Jammu and Kashmir, India has long been out of the negotiation process with the Taliban. US Special Envoy Zalmay Khalilzad said last year that India should directly meet with the Taliban, and the Taliban stated that "Kashmir is an internal matter of India and will not interfere."[8] Thereupon, it was announced that Qatari and Indian officials and Taliban leaders held a meeting in Doha.[9]

The fact that Chinese Foreign Minister Wang Yi has urged the Taliban to make a "clean break" with terrorism should the group retake Afghanistan is an indication that China has been preparing to cooperate with the Taliban. Meanwhile, the statements of the spokesperson of the Taliban that "China is a friendly country and we welcome it for reconstruction and developing Afghanistan" and that "Taliban will not interfere in China's internal affairs" has drawn attention.[10]

All this shows that the regional states and the platform established to develop regional links under the leadership of Washington are likely to cooperate with the Taliban. As for the European Union, it is thought that it can take steps to promote stability in the region against a possible large refugee wave.

[2] Maria Siow, “Does the new US-led ‘Quad’ with Pakistan, Uzbekistan and Afghanistan have China in its sights?”, SCMP, August 7, 2021, https://www.scmp.com/week-asia/politics/article/3144010/does-new-us-led-quad-pakistan-uzbekistan-and-afghanistan-have

[6]  “Does the new US-led ‘Quad’ with Pakistan, Uzbekistan and Afghanistan have China in its sights?”…

[7] Andrew Roth, “Russia is sharing information with the Taliban to fight the Islamic State”, The Washington Post, December, 23, 2015, https://www.washingtonpost.com/news/worldviews/wp/2015/12/23/russia-is-sharing-information-with-the-taliban-to-fight-the-islamic-state/

[8] Hamid Mir, “India may be talking to the Taliban. Here’s why we should welcome it”, The Washington Post, July 13, 2021, https://www.washingtonpost.com/opinions/2021/07/13/pakistan-should-not-object-if-india-talking-with-taliban/