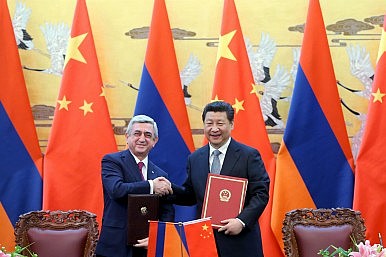 Russia currently spends twice the national average per inhabitant for the North Caucasus republics[1] despite the fact that it is a region in which authority lies moew on local strongmen, most notably Ramazan Kadirov in Chechnya, than it does on the federal government. In fact, the North Caucasus is the geopolitically most fragile area in all of Russia. Geographically the Caucasus mountains while facilitating the existence of rebel movements, are also providing a natural barrier to the Russian flatlands where most of the population and production centers are. Therefore Moscow is ready to pay any necessary cost to ensure its hold on this area.

The same is true in many ways for the former Soviet Republics of the South Caucasus: Armenia, Georgia and Azerbaijan. Russian decision makers think of these sovereign states as an outer ring of security and an indispensable zone of influence. The strength of the economic, cultural and military links enables this to Russia to a great extent. Armenia, being the most extreme example is run by a Russian educated elite, is dependent on remittances from its diaspora in Russia[2] and relies on the Russian military for its security. Georgia and Azerbaijan are to a much lesser extent also connected to Russia, notably many sectors in their economies and their military equipment rely on Russia. After all, these regions were part of Russia Empire and later of the Soviet Union for more than a century.

However, it is necessary to stress that this Russian influence is far from being accepted by the new sovereign states. In fact, even Central Asian Republics that were artificially carved during the Soviet Union are pursuing processes of cultural and political national emancipation from Russia. As a matter of fact, Central Asian Republics are looking to extend the use of their national languages to official and bureaucratic domains that were for a very long time completely dominated by Russian as the absolute lingua franca. Azerbaijan, Georgia and Armenia are another story: these countries all have identities and histories that goes back for centuries and even millennia, their own alphabet and literature and national elites. Georgia and Armenia existed as independent kingdoms before the creation of the Russian empire. As a result, their yearning for independence from Russia is far stronger than those of Central Asian Republics.

Often, Russia needs to use leverages to keep them in line with its interests. An example is the Russian use of the Armenian-Azerbaijani conflict in which it sells weapons to both parties and at the same time ensures mediation. It is notable how, President Vladimir Putin visited Baku with the Russian Caspian fleet in September 2013, within the same month as the Armenian President expressed that he considers signing an Association Agreement with the European Union[3]. Russia does not hesitate to deploy its military forces to ensure its hold in the Caucasus as the 2008 war with Georgia showed.

Consequently, the Caucasus Republics, unable to stand alone against Russian economic and military might have constantly attempted to draw other powerful actors in the region. It was primarily Western actors until now. All three Caucasus republics are part of the Individual Partnership Action Plan of NATO. In the 2008 Bucharest Summit, it has been agreed that Georgia would eventually join the organization as a full member. The then Georgian President Mikhail Saakashvili considered that NATO would guarantee his country’s security and sovereignty against Russia. However, his attempt of ensuring Georgia’s sovereignty over Abkhazia and South Ossetia was met with failure as Russian tanks arrived as close as 20 km of Tbilisi. The only diplomatic reaction within the Western World towards this event came from Nicolas Sarkozy who was the President of France which had the presidency of the European Union at the time. This initiative was presented as a success in « curbing Russian aggression in the Caucasus » however it was very questionable that Russia was willing to advance further in its invasion of Georgia[4]. On the opposite, this agreement with the European Union and Russia could be considered as a recognition by European countries that the Caucasus is within Russia’s sphere of influence. In 2011, Russian President Dimitri Medvedev stated that in the absence of a Russian response in 2008, Georgia and perhaps other Caucasus republics would have joined NATO. Overall, the West and especially Europe is unwilling to challenge Russia any further. Despite the existing sanctions, Russia is maintaining its hold in Crimea and it seems unlikely that this will cease. The Caucasus is not of vital interest for any Western power whether it is the European Union or the United States. Therefore, they would not and probably could not militarily attempt to challenge Russia’s dominance in the region.

However, there is another emerging actor that has the potential to increase its presence in the Caucasus and to jeopardize Russia’s dominance: China. The main advantage that China has over the West is that the expansion of its influence is not necessarily accompanied by a political and even military presence. Regardless of whether this assumption is true or not, Russia perceives the West as a more threatening presence than China. The idea of a NATO or even European Union presence in Ukraine was perceived as an utterly direct threat to Russian national security. Even though, the European Union does not have any institution of any resemblance to a common military force, its expansion is a political one. On the other hand, China doesn’t present its influence as a geopolitical one and often succeeds in reassuring other actors about this. Besides this reality, Russia is currently isolated by western powers and it couldn’t afford to increase its tensions with China. Actors in the Caucasus seem willing to improve their ties to China as evidenced by Beijing’s recent rapprochement with Armenia. Overall, Chinese economic presence in the Caucasus has been dramatically increasing. The region could also play an important role in the One Belt One Road initiative promoted by the current Chinese Administration. This initiative consists of massive infrastructural investment in Eurasia to create both maritime and land based trade corridors between Europe and China. With the completion of the Baku-Tblisi-Kars railway, it would be possible to transport products rapidly from the Caspian Sea to Europe. This project is crucial for China and the Caucasus republics are shaping their foreign policy according to this and seeking deeper ties with Beijing. One must also stress the fact that if the One Belt One Road initiative succeeds, this trade corridor through the Caucasus would become strategically important. It is noteworthy that the Asian Infrastructure Investment Bank, responsible for financing the One Belt One Road project has approved its largest loan yet, worth 600 million dollars for the Trans-Anatolian Natural Gas Pipeline Project (TANAP)[5] which is a project that directly concerns the natural resources of the Caucasus within the New Silk Road initiative framework. The South China Sea dispute is a testimony that China always seeks to build a military presence in areas where its commercial interests lay. Even if China genuinely doesn’t seek to build a military presence in the region but only seeks to improve commercial ties, it could come to a position where it doesn’t have much of an option. Especially because Russian influence in the region often tends to be destabilizing. China therefore appears to be the strongest candidate to balance Russia in the region.

[3] Grigoryan Armen; Armenia: Joining under the Gun; Putin’s Grand Strategy; The Eurasian Union and Its Discontents; 2014.