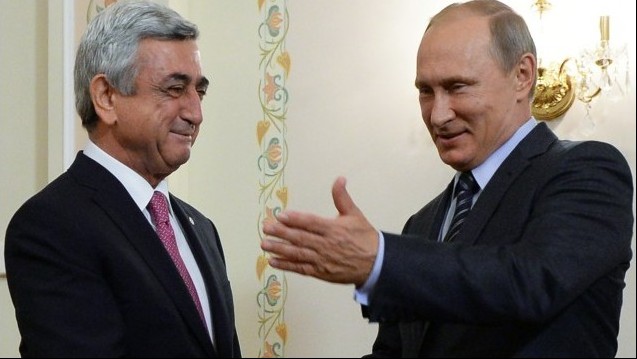 Since its independence, Armenia has endeavored to pursue a balanced policy between Russia and Western countries. The main reason for this is Armenia’s effort, as a small and vulnerable country, to maintain its security, economic welfare and political stability by taking advantage of the rivalry between Russia and the West. Armenia’s its relations with Russia can be defined as one-sided dependency on issues such as its ongoing occupation in Azerbaijani territories, maintenance of internal economic and political stability, and energy. On the other hand, in its relations with the US and the West, Armenia seeks cooperation in fields such as the military, foreign economic and technical assistance. As it can be seen, Armenia’s cooperation with Russia and the West covers numerous topics that are common but also mostly conflicting. The latest example of Armenia’s policy of taking advantage of the rivalry between Russian and the West can be seen in the latest cabinet changes in Armenia.

Following the Armenian constitutional referendum in 2015, the proposed amendment to change Armenia’s government system from a presidential system to a parliamentary republic was accepted. The opposition in Armenia claim that Serzh Sargsyan, who currently serves his second and last term as President, had planned this constitutional reform to remain in power. While these development was taking place in internal politics, the Four-Day War with Azerbaijan led to a political crisis in Armenia. The fact that Russia didn’t show support to Armenia during the Four-Day War despite bilateral agreements and both being members of Collective Security Treaty Organization led to a rise in anti-Russian sentiments in the country. Furthermore, the pressure on the government increased following Armenia’s defeat in the Four-Day War, and reached a peak with the seizure of a police station by Armenian opposition members on July 17. The climate of distrust and oppositional criticisms due to Karabakh, coupled with Armenia’s worsening economy, forced President Sargsyan to make sharp changes in the cabinet prior to the planned transition to parliamentary system in 2017.

The newly formed cabinet in Armenia is an example of efforts to use the rivalry between Russia and the West is used in favor of Armenia. Karen Karapetyan, the newly appointed prime minister of the new cabinet, had previously served as the Deputy Director General (1996-1998) and Director General (1998-2001) of the state-owned energy company “Armenergo”. Serving as the Deputy Minister of Energy of the Republic of Armenia for a short period in 2001, Karapetyan later worked as Director General of ArmRosGazprom between the years 2001 and 2010. Following a short stint as the Mayor of Yerevan (2010-2011), he returned to Gazprom and quickly rose the ranks, first becoming Vice President of Gazprombank (2011-2016) and later, in conjunction, he held the position of Deputy Director General of Gazprom Mezhregiongaz (2012-2016). The fact that a person who served in important positions within the Russian energy giant was appointed as the new Prime Minister once again confirms Russia’s influence over Armenia. At the same time, this also shows Armenia’s expectation from Russia to make up for the lack of support it showed in the recent war in Karabakh during this transitional period. Indeed, a week later after Karapetyan’s appointment, Gazprom approved a money transfer of 631 million AMD (approximately 1.3 million dollars), of which 415 million AMD will be later returned to Gazprom, to the Armenian government for the renovation of energy infrastructure. Furthermore, in the past week, as far as reported in the Armenian press, the sale of the Yerevan Thermal Power Plant to Gazprom was in the talks, but was later announced that such a sale was not in the agenda of the Armenian government at the moment. Karapetyan’s appointment as Prime Minister also came at a time when energy talks between Armenia and Iran gained momentum. The goal of bringing Iranian gas to Armenia is to reduce Armenia’s energy dependency to Russia. However, in this new period, Karapetyan’s government and thus Gazprom can be expected to interfere in the cooperation between Armenia and Iran in favor of Russia.

Probably the most important development in this context is Russia’s surprise sale of, as far as it is known, four systems of Iskander ballistic missiles – a transaction outside of the 2015 military agreement signed between Russia and Armenia. These missile systems which was previously exclusively used by the Russian army and have the ability to avoid radar detection and carry conventional and nuclear warheads, was showcased during Armenia’s Independence Day parade on September 21, quickly becoming an agenda topic in the world press. It is not known on what conditions Armenia acquired these missiles. It is known, however, that Russia has plans to deploy these missiles in Eastern Europe, Crimea and Kaliningrad against NATO. When considered from this aspect, the sale of these missiles raises the question of whether this transaction was done with the aim of solely supporting Armenia or not. This also brings into question a new arms race with Azerbaijan, which is one of the most important Russian weapons importer in the region. The supply of Iskander missiles to Armenia can be regarded as a response to disappointments about Russia following the Four-Day War in Karabakh and to the increasing anti-Russian sentiments within the Armenian society. The appointment of Karapetyan, a former Gazprom executive, as the Prime Minister of Armenia can result in Russia’s increasing military and economic influence and support in the mid- and long-term.

A US-Educated Civilian Minister of Defense

The influential Armenian diaspora in the US is one of the reasons why the US gives special attention to relations with Armenia. For instance, Armenia holds a special position in American foreign aid programs. Foreign aid to Armenia by the Us amounts to nearly 2 billion dollars since its independence and is the highest among the post-Soviet countries. Moreover, the US has excluded Azerbaijan from the foreign aid programs because “Azerbaijan continues to apply an embargo against Armenia”. When built in 2005, the US embassy in Yerevan was the biggest among US embassies around the world.

The US support to Armenia does not only include economic and political aids, but also extends to military as well. Since 1994 Armenia is a partner in the NATO Partnership for Peace program. Thus, Armenia actively participates ISAF in Afghanistan and KFOR in Kosovo. Immediately after the 2008 Georgian-Russian war, Armenia was the first country to host NATO drills in the region. Since 2011 Armenia is also included in NATO’s Individual Partnership Action Plan (IPAP) and therefore continues to cooperate with NATO not only in defense issues, but also political and security areas such as relations with neighboring countries, democratic standards, rule of law, combat with terrorism and corruption. American army gave training in several areas to Armenia in 2012 and 2013, and even donated its first mobile hospital to Armenian in 2007. Therefore, despite being a member of an opposite military organization, i.e. Collective Security Treaty Organization (CSTO), Armenia is also flirting with Russia. Maintaining these bilateral relations holds special importance to Armenia.

Appointment of Vigen Sargsyan after the recent changes in the Armenian government, i.e. a US-educated civilian, as Defense Minister was seen by most commentators as a message to the US and the West. Sargsyan served as Armenia President’s Chief of Staff before his appointment and therefore has been close with the Armenian President, playing a primary role in dealings with the Armenian government. Also, this appointment is in fact a sign that the President Sarkisyan will maintain a high degree and close involvement (especially in terms of defense) with the government’s actions. It is important to note that the previous Ministers who hold the position were mostly either of Karabakh background or ex-military generals. Sargsyan’s appointment in that manner can be interpreted as a sharp turn from that tradition. There has been extensive replacements and ousting in the military and intelligence community in Armenia after the failure in the Four-Day war. In that regard, Sargsyan’s new post could mean that these changes in Armenian military and security structures will continue and will be under the control of Sargsyan. Immediately after the appointment President Sargsyan said that the new defense minister will not only deal with the daily and war-related issues, but will be a minister who also deals with the personnel, training and the veteran rights of the military. It remains to be seen whether Sargsyan could give momentum to relations with the US and NATO in defense-related issues, whoever he already began to confront domestic criticisms by the opposition in Armenia. Whatever the reactions may be, Sargsyan’s appointment by the President might be seen as a result of a disappointment with the Russian passivity during the Four-Day War.

As a result, Armenia will face a period of systematic change during which the Armenian President Serzh Sargsyan will try to maintain his hold onto power following the 2017 parliamentarian elections and the 2018 presidential elections. During this critical time, the eruption of a new “Four-Day war” might have irrecoverable consequences for the country. Russia’s supply of Iskander missiles to Armenian army might also exacerbate the already intense arms race with Azerbaijan. The appointment of a new Defense Minister of civilian and US background might create an orientation towards the US, while Armenian economy seems to be left relinquished in Russia’s favor with a new Prime Minister. Either way, Armenia slowly falls victim to its ongoing occupation in Nagorno Karabakh and the surrounding rayons, which increases its feeling of insecurity, therefore is running out of options for a sustainable balance between the West and Russia.