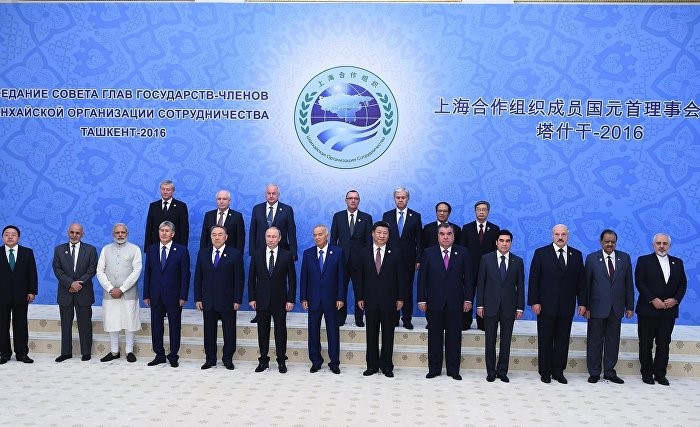 The formation of the Shanghai Five, based on the Agreement on Enhancing Trust in the Military Area on the Border in 1996, has laid the foundation of the Shanghai Cooperation Organisation (SCO).  The aim of the original five countries (Kazakhstan, China, Kyrgyzstan, Russia and Tajikistan) was to create mutual trust between key countries of the region in order to establish a secure and stable region for mutual development. With the participation of Uzbekistan, organisation’s name has changed to its current one. Right now, there are six observer countries, which are Afghanistan, India, Pakistan, Iran, Belarus and Mongolia. However, with the recent developments in the Uzbekistan summit, India and Pakistan are about to become full member countries. There are also six dialogue partners: Turkey, Sri Lanka, Azerbaijan, Armenia, Nepal and Cambodia. Russian and Chinese are the official languages of the organisation.

The Charter of the Shanghai Cooperation Organisation was signed in St. Petersburg in June 2002. The Charter contains the main aims of the organisation such as fight against terrorism and regional stability. SCO has also taken initiatives against international drug cartels since 2006.

In 2003, organisation took an economic action by agreeing on the Program of Multilateral Trade and Economic Cooperation which, in the long-run, aims to create a free-trade zone among the member countries. The aims of the cooperation, which are beneficial for all member countries, have kept widening throughout years. Right now, its main goals are strengthening the mutual trust between member neighbouring countries, promoting cooperation in politics, development in education, science, trade, tourism, and environmental protection.

The highest decision making branch of the organisation is the Heads of State Council (HSC), which meets once every year. The Heads of Government Council (HGC) also meets every year to discuss strategies in order to develop win-win policies for all member countries and discuss solutions for problems. There are also other levels of meetings that focuses on specific issues such as economics, terrorism etc.

The Council of National Coordinator is responsible for the coordination in the framework of this organisation. The secretariat in Beijing and the Regional Anti-Terrorist Structure in Tashkent are the two permanent offices of the organisation.[1]

Under the presidency of Uzbekistan in 2015 and 2016, many developments have occurred in various areas such as; politics, security, economy, transportation, culture and humanitarian aims along with the discussions on the expansion of SCO.

Views on the security and stability in the region were shared at the 11th meeting of Secretaries of Security Councils of the SCO member countries that was held in 13-14 April 2016 in Tashkent. Later on, the Council of Ministers of Foreign Affairs took place again in Tashkent in 23-24 May.  The current general status and the prospects of the cooperation have been discussed along with how to enhance the international role of SCO. The need for more observer and dialogue partner countries have also been mentioned at the Council. This has re-emerged the expansionist ideas that were stated in the Ufa (Russia) summit by giving green light to the inclusion of Pakistan and India. The outcome of the HSC meeting that took place in July 9-10, 2015 was also put on the table. Within the framework of this meeting, member countries decided on the necessity of an Action Plan for the SCO development strategy until 2025. The necessity of India and Pakistan to sign the memoranda of obligations was also mentioned. Thirdly, the Regional Anti-Terror Structure Council meetings took place on September 2015 and April 2016 in Tashkent. As a result, these meetings have confirmed the approach to solidify the SCO’s global position and the cooperation against the regional security issues.

Economy, as another key concept for the development of SCO was also one of the priorities under the presidency of Uzbekistan. In order to enhance the economic cooperation in business and finance among member and observer countries, the Council meeting of the SCO Interbank Association and the Board of the SCO Business Council on 23-24 June have taken place. Also, the meeting of HGC on December 2015 and the Ministerial Meeting on economic and trade issues on September 2015 were conducted for further economic developments. The ninth meeting of Ad Hoc Working Group took place to develop the transit potential of the SCO members in October 2015 and experts agreed on developing the SCO Road Development Program.

On the other hand, in order to establish good neighbourly relations among the member countries, cultural and humanitarian cooperation is highly important. Cultural interactions among member countries have increased greatly with the agreement to cooperate in cultural fields in August 16, 2007. The next meeting of Culture Ministers of the SCO Member States took place in June 21-22, 2016. In this summit, an agreement for the development of tourism is signed by the relevant ministers of the countries. Also, Uzbekistan has started the steps to find a solution for the Aral Sea disaster in accordance with the last meeting about natural and technology related disasters in Chengdu (China) in 2015.

As stated at the Council of Ministers of Foreign Affairs, the desire for new members was present and the decision to accept India and Pakistan as full member countries was given at the Ufa summit in 2015.[2] Pakistan and India have signed the memorandum of obligations in the Uzbekistan summit. This was an important step towards full membership which is soon to be achieved.[3] Also, Cambodia was granted the dialogue partner status in September 2015 and relevant memorandums were signed by Azerbaijan, Armenia, and Nepal in March and April 2016.

For Pakistan and India (two countries that ask for inclusion in Nuclear Suppliers Group), SCO summit that was held on June 23 was highly important for a number of reasons.[4] Both countries were willing to benefit from this summit to achieve support from other countries for the NSG meeting that took place in June 23-24, 2016 in Seoul, but nevertheless, the most important and beneficial intention was to sign the memorandum of obligations to become a full member country. This would bring many economic and security related advantages along with it. Also, it is argued that the acceptance of these two countries into an economic and security focused organisation can lay the foundation of mutual trust and understanding between these two countries.[5] On the other hand, their inclusion is going to enlarge the region that SCO has to focus on for stabilisation efforts. The increase in the area of jurisdiction for anti-terror activities is going to bring many responsibilities and SCO should be ready to bear such responsibilities.[6]

Iran, on the other hand, is another possible candidate to become a full member. Iran has the potential to become an important actor within the organisation due to its geopolitical status as well as its possible contributions to security and stability of the region. It can serve as an opening door of the organisation to the West, which can also be advantageous for the New Silk Road and International North & South Corridor projects that are quite advantageous for almost all of the Asian countries.[7] However, Iran still remains as an observer country and no decision was taken during Uzbekistan summit for Iran to become a full member country.

Inclusion of new countries can bring funds, more economic and security possibilities, but they will also bring more responsibility along with them. SCO should assess these applications carefully and decide whether it is beneficial for these countries to become members or to stay as observers.