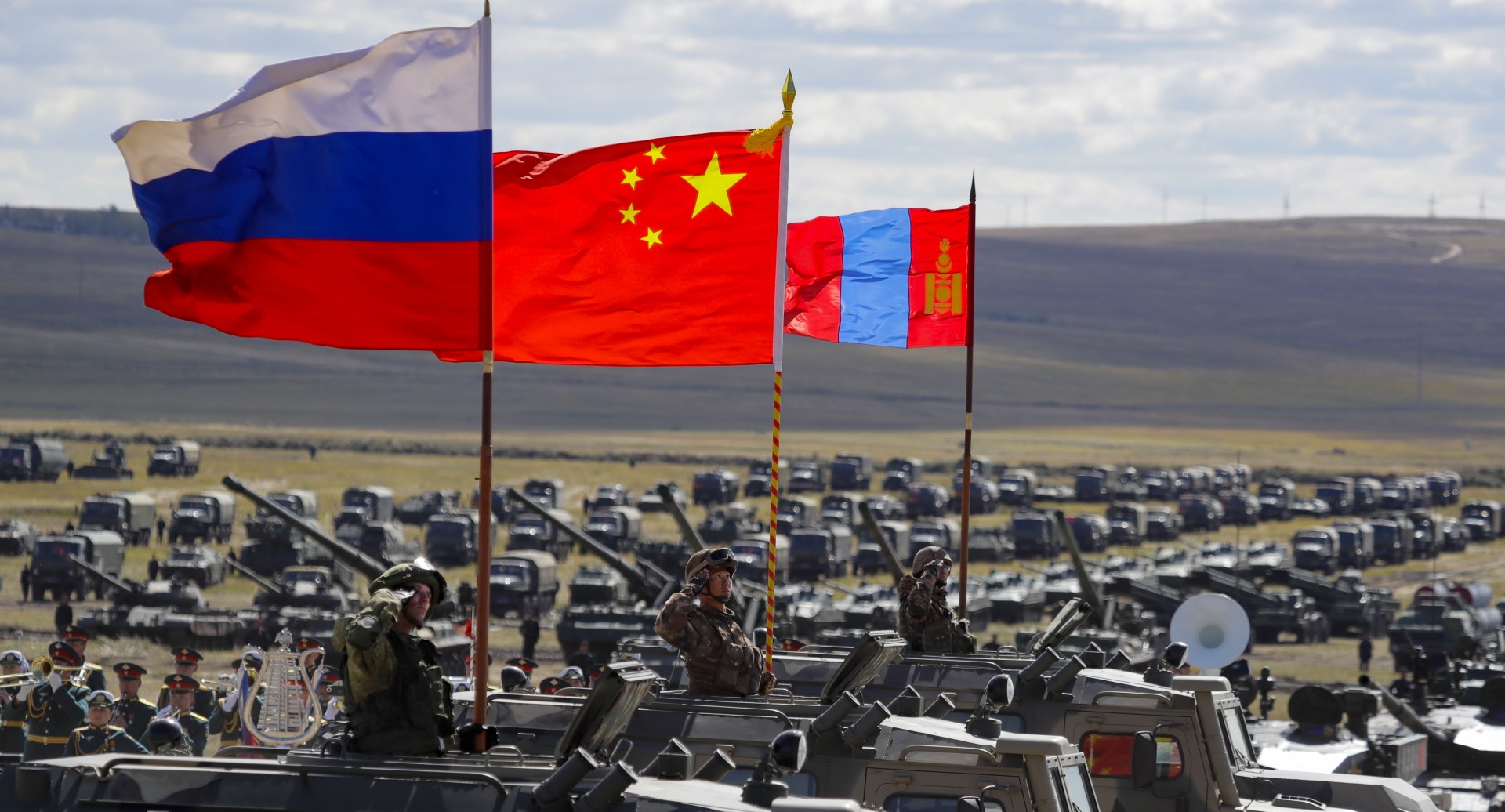 The Vostok-2018 military exercise started on 11 September in the east of Siberia with the participation of Russia, China and Mongolia and it lasted until 17 September. Putin watched the exercise’s main phase on 11 September with Russian Defense minister Sergey Shoygu, Chinese Defense Minister Wei Fenghe, Russian Chief of Defence Valeriy Gerasimov and Mongolian Commander of the Armed Forces Union Ganselem Lhagvasuren.[1] The most important feature that distinguishes this exercise from others is that Vostok-2018 was the biggest military exercise performed in Russia after the 'Zapad-81' exercise in the Soviet Union in 1981.[2]

Russia's land, air and naval forces have actively participated in the exercise. The Russian Defense Ministry expressed in its statement: "Approximately 300,000 Russian soldiers, more than 1000 aircrafts, helicopters, unmanned aerial vehicles, 36,000 tanks, armored vehicles and other military vehicles, 80 ships and support vehicles are used in the exercise". According to the statement, the exercise was carried out between the dates of 11-17 September in 5 military areas and territorial waters (the Sea of Japan, Bering Sea and the Sea of Okhotsk) located in Russia's Far East Region.[3]

It would be useful to examine this exercise in several aspects. Firstly, we observe that the ties between China and Russia are getting stronger. According to the many scholars/experts these two countries are expected to have serious conflicts of interest, especially in the Central Asian region, due to the future of the Belt and Road Initiative (the Silk Road Economic Belt) and Russia's support for India's defense industry. These two countries are acting together in Vostok-2018 and seem to be aware of the strength and strategic importance of the bond between them. The "East Economic Forum" had taken place in 11 September at the same day of the beginning day of Vostok-2018.[4] Both countries have acted together here as well. It would not be wrong to consider the United States as the main trigger of this union. The two countries have acted together in certain other crises (North Korea's nuclear disarmament, etc.). Apart from that, another important political point is that Russia has started to turn away from the West as a result of its economic depression and the embargos it has been experiencing. We are seeing a more easternized Russia after the American embargo mentioned above and the on again off again relations with the European Union. This result is not surprising when its important role in Shanghai Cooperation Organization is considered. The exercise serves practical aims as well as political aims. China has not been a part of any hot conflict for almost forty years.[5] Vostok has a participation network that can be defined as a war game rather than an exercise. One-third of the Russian army was standing ready during the exercise. Likewise, China attended the exercise with approximately 3 thousand 200 soldiers, 30 rotary wing aircrafts and about 900 land battle platforms.[6] This has helped to see China's military capacity in the field. It may be wondered why Mongolia is part of Vostok-2018. The most fundamental and realistic reason is geography. Mongolia has only two neighbors. These are Russia and China. Being located between two large countries leads to the result that its geopolitical position rests upon very delicate balances. Mongolia follows the ‘Third Neighbor’’ policy and has declared some countries, including Turkey, third neighbors.[7] But this policy does not mean that Mongolia can be isolated from the realities of region.

At the present time, a military exercise of this size has the features for being perceived as a threat especially by the Asia Pacific countries that are allies of the West. It would not be wrong to say that, out of these countries, the main one would be Japan. Even though Japan has recently been trying to make progress in its relations with Russia and China, which has delicate balances, it has border problems with both countries. The problem of the East China Sea with China and the Kuril Islands issue with Russia are the main border problems for Japan.[8] China and Russia's growing relations that are including the military field have the potential to be a problem for Japan.

Another interesting detail about Vostok-2018 is the date of exercise. The Vostok-2018 exercise started during the same period with the ‘Rapid Trident’ exercise of NATO in Ukraine from 3 September to 15 September. The official statements of both the Chinese and the Russian side explained that the exercise is not targeting a third party. Valeriy Gerasimov, the Chief of Defence of Russia, stated that the exercise was not aimed at any country, it was for defense purposes only. The Chinese Defense Minister explained that the exercise was made against “defense and counter-attack” scenarios.[9] However, NATO claimed that the Vostok-2018 exercise was "a rehearsal for a major crisis". Regarding the military exercise, NATO Spokesperson Diline White stated "Vostok-2018 displays that Russia is focused on preparing itself for a major crisis".[10] On the other hand, Russia was expressing its discomfort about the increase of NATO's presence on its borders.

Turkey was among the countries that was invited as an observer to the exercise. On the way back from the Tehran Summit, President Erdoğan answered the questions of the journalists that accompanied him on the flight and evaluated the developments in the region. National Defense Minister Hulusi Akar also stated “In the following days, the Vostok-2018 exercise will be conducted. They also called Turkey. We are evaluating.”[11] The representative of the Turkish Embassy in Moscow gave a statement to the Russian official news agency Ria Novosti, stating "A delegation from our Embassy’s Military Office will participate in the Russian Armed Forces’ Vostok-2018 exercise as observes."[12]

Although statements have been made from the Russian and Chinese sides that the exercise does not have any target, Putin has stated that “It is our debt to our homeland to be ready to protect our country's sovereignty, security and national interests and to support our allies if it is necessary. Therefore, we will continue to strengthen our army, to equip it with new generation weapons, to develop international military cooperation.”[13] According to many military experts, one of the most critical aspects of the exercise is what kind of scenario will follow. As mentioned earlier, factors such as the size of the force prepared for the exercise and the participation of the People’s Republic of China’s forces have led many experts to the consider a war scenario on a global scale.[14] Although China and Russia's military alliance is controversial, an exercise of this size and its potential consequences will probably affect the coming developments as a result of China's active participation. Russian Defense Minister General Sergey Shoygu stated that it is being planned to hold a large-scale military exercise every 5 years in Russia.[15] This statement indicates that the world should be ready for the new Vostok-2018s. Time and developments will show to what extent the United States, which is applying an embargo towards Russia and has initiated a trade war with China, will pull the two large neighboring countries, which are historical rivals, towards an opposing front.