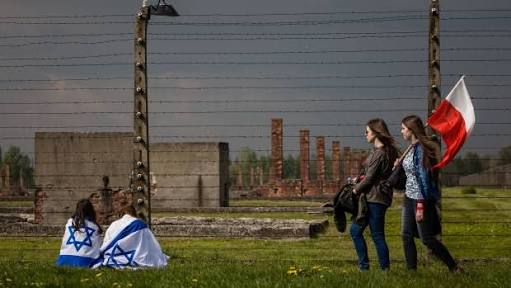 Poland has recently enacted a law on Holocaust denial. The said law, while criminalising the denial and trivialization of the Holocaust, also prohibits the characterization of Holocaust in a way that would ascribe the Nazi atrocities also to the Polish government or the Polish nation. As it is known, several of the most infamous Nazi concentration camps, including Auschwitz and Treblinka, were established on the territory of modern-day Poland after the country had been invaded by the Nazi Germany in 1939. For a long time, Polish authorities and large sections of the Polish public opinion have felt understandable discomfort with terminology such as “Polish death camps” or “camps in Poland”.

Per the international media, the law is said to state that "… whoever accuses, publicly and against the facts, the Polish nation, or the Polish state, of being responsible or complicit in the Nazi crimes committed by the Third German Reich … shall be subject to a fine or a penalty of imprisonment of up to three years."[1] It also adds that a person "is not committing a crime if he or she commits such an act as part of artistic or scientific activities."

Polish authorities describe the law as “anti-defamation legislation”. The Polish ambassador to the US made the following clarification;

“To those who claim that this legislation will inhibit discussion of the Holocaust or research of the dark days of persecution, please note that this legislation has nothing to do with the discussion or study of painful instances of collaboration or complicity by individual Polish nationals in the crimes of Nazi Germany. Rather, it states that the Polish Nation, as a collective, and the Polish State, cannot be held responsible for the crimes of others. Moreover, academic work and artistic expression are fully exempt from the law.”[2]

There has been a certain degree of international reaction to the said Polish legislation. Israel and the United State have criticised the legislation. Israel professes the legislation to be a denial of the Holocaust. The US has also criticized the Polish Holocaust legislation. Strikingly, the US authorities mentioned the importance of free speech in their assessments of the said legislation. For example while the US Secretary of State Rex Tillerson said the law “adversely affects freedom of speech and academic inquiry,” the State Department Spokeswoman indicated in a statement that “we encourage Poland to reevaluate the legislation in light of its potential impact on the principle of free speech and on our ability to be effective partners.”[3]

Interestingly, France is at the forefront of the countries to criticize the said Polish legislation. It is reported in the international press that the Foreign Minister of France Jean-Yves Le Drian told BFM television that; “This law is ill advised, you should not rewrite history, it's never a very good idea, and the vote to push the measures through should be condemned.” When asked if the European Union would take measures in relation to the said law, the French Foreign Minister replied that “moral pressure will be sufficient”. It seems, however, that the EU has been quiet on the issue. According to the Belgian on-line newspaper The Brussels Times, when asked by the newspaper on the EU Commission’s position on the “Holocaust law”, a spokesperson for the Commission referred to a reply given by the Vice-President Frans Timmermans for a similar question at a previous press conference. Timmermans very remarkably stated that “he could not comment specifically on the law but the interpretation of history should be left to the historians.”[4]

In this context, it should be remembered that French Parliament adopted a law on 29 January 2001 that recognizes the 1915 events that took place in the turbulent era of World War I as “genocide”. In 2011, France attempted to criminalize the “denial” or rejection of the genocide label for the 1915 events by way of a legislation. However, in 2012, the implementation of the said law was suspended by the Constitutional Council, France’s highest court, as its constitutionality was challenged on several grounds, including the violation of the freedom of expression and communication. Furthermore, on 8 January 2016, the French Constitutional Council delivered its verdict on the case that was filed for the repeal of the Gayssot Act that outlaws the denial of the Holocaust, making a clear distinction between the Holocaust and the Armenians’ claims regarding the 1915 events.

The plaintiff for the case argued that the act should be repealed due the fact that, despite criminalizing the denial of the Holocaust, the act does not criminalize the “denial” of the “Armenian Genocide” or other similar events legally recognized by France. Armenian activists in France and the French-Turkish “Association for Neutrality in Turkish History Education” (TTETD), which requests the removal of the Armenian genocide claims from school textbooks in France, joined the case as intervening parties. In its application, TTETD argued that the 2001 act accusing Turkey for committing the “Armenian Genocide” lacks a legal basis and therefore requested its repeal due to it being in violation of the Constitution of France. In its verdict, the Constitutional Council of France decided that the Gayssot Act does not violate the Constitution of France, since it foresees the penalization of the denial of crimes that have been ascertained by an international criminal court. In this respect, the Council confirmed that only a competent court may determine whether an action constitutes genocide. The Council’s verdict eliminated the potential effects of the 2001 law that recognizes the events of 1915 as genocide and the possibility for the adoption of acts that criminalize the rejection or the “denial” of the “Armenian Genocide.”

The Constitutional Council's verdict affirmed that whether an act of genocide (or crime against humanity) has been committed or not can only be determined by a competent court and, further, legislatures or governments cannot declare an event as genocide.[5]

What was said in relation to the Polish legislation on Holocaust brings to the fore important assessments and considerations regarding certain claims of genocide. Firstly, as mentioned in the French Constitutional Council decision, as far as the Holocaust is concerned, the penalization of the denial of crimes are based on the competent international court decisions. The act of genocide can only be determined by a competent court. It is not in the authority of legislatures or governments to declare genocide solely upon their political discretion. Hence, there is a clear legal distinction between the penalization of the Holocaust denial, and the denial and questioning of the arbitrarily declared genocide claims. Secondly, in the light of competent court decision, the right of free speech cannot be considered valid for the Holocaust. Speaking in denial of the Holocaust might be considered as hate speech instead of free speech. In contrast to this, free speech, freedom of expression, and free inquiry are the fundamental rights of those who are challenging baseless claims, slanders, and unjust characterizations.

Another important assessment voiced in this respect is the one attributed to Vice-President of the European Commission Frans Timmermans, who reportedly stated that “the interpretation of history should be left to the historians.” Clearly this is a very wise and fair suggestion. Passing judgment on an accusation like genocide should not be left to the mercy of political considerations. Parliaments should not take the place of courts and deliver verdicts on it. In the same vein, Parliaments and other political institutions should not legislate and thereby politicize history.

It should be noted, however, that the European Union must examine itself first before making calls upon countries like Poland regarding historical issues. The readers will remember that it was one of the EU’s own intuitions, the European Parliament, whose members attempted to act as if they were historians and who adopted a resolution in 2015 characterizing the 1915 events as genocide. As such, while the EU dispenses advice to Poland on what do to about the interpretation of history, its own institutions act in a manner that contradicts its own advice.

Going back to Frans Timmermans’ words, it would be prudent to convey them to the French President Emmanuel Macron, who very recently promised at the dinner of the Coordination Council of Armenian Organizations in France “to include a Day of Commemoration of the Armenian Genocide in the calendar.”[6] It is also reported that French President has also said that “fight for the recognition of Armenian genocide is at same time fight against the denial of the genocide”.[7] It seems that French President is not only preparing for challenging the French Constitutional Council decisions, but also intends to “rewrite the history” according to his own opinions. As such, based on its own politicians’ conduct on this issue, France does not really have much of a right to direct criticism at Poland.

In sum, what has been written here is not to discuss whether Poland was right to pass a law regarding Poland’s or the Polish nation’s portrayal in discussions on the Holocaust. The main point here is that international actors such as the EU or France should first look at how their own politicians are twisting historical issues for political considerations before directing criticism at anybody else.

[2] “Ambassador Piotr Wilczek in The National Interest,” Embassy of the Republic of Poland in Washington, D.C., February 16, 2018, http://www.washington.mfa.gov.pl/en/news/ambassador_piotr_wilczek_in_the_national_interest

[5] Turgut Kerem Tuncel, ed., “Conference Titled  An Assessment of Armenian  Claims in Light of the Verdicts of the Constitutional Council of France and the ECtHR,” in Center For Eurasian 2016 Annual Report, trans. Ali Murat Taşkent (Ankara: Center For Eurasian Studies, 2017).