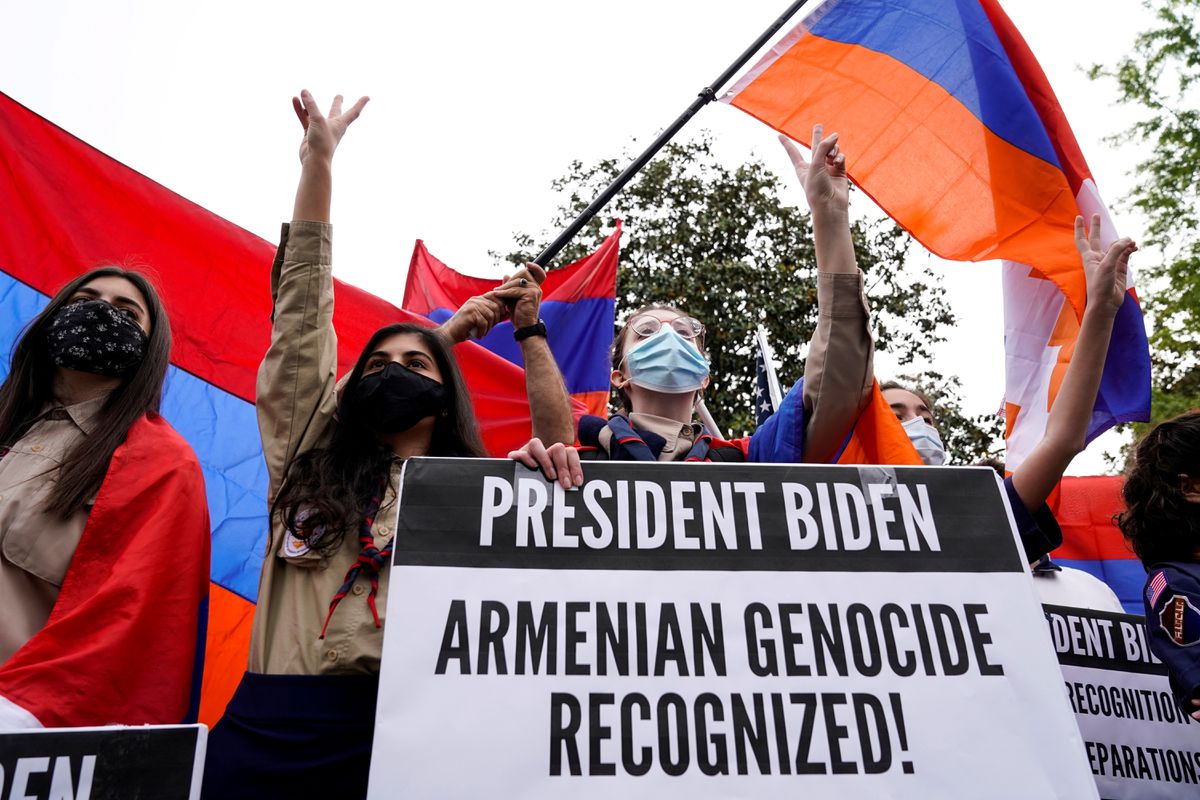 On 24 April 2021, US President Joe Biden issued a statement[1] characterizing the 1915 Events as “genocide”. We have strongly argued in our previous articles[2] that the rationale for parliamentary resolutions and governmental proclamations concerning this issue is based not on moral concerns, but on political calculations. We will interpret the meaning and repercussions of Biden’s statement with this understanding.

President Biden’s statement should be viewed as an attempt by the US administration to punish Turkey out of a frustration generated by the considerable friction between the two countries on a multitude of issues. The level of vitriol and distrust between the two sides have reached such unprecedented levels that, unless the current trajectory is reversed, Turkey and the US will end up being NATO allies in name only, a façade kept up only to avoid jeopardizing the world’s premier military alliance founded on democratic principles. In this sense, there were plenty of signals (most importantly, the 2019 US Congressional genocide resolutions) in the last couple of years that a statement of this nature would come from the US administration. However, the unsurprising nature of the statement does not make it any less damaging for Turkish-American relations.

When analyzed, even though Biden’s statement appears to be about the suffering of Armenians, in truth, Armenian identity and historiography is simply being abused in the name of political retaliation. The reason for this assessment is that, if one traces the history of parliamentary resolutions and governmental proclamations on this matter and investigates their pattern, it becomes apparent that they are overwhelmingly adopted in the context of intense lobbying by Armenian organizations and a given country’s ongoing problems in bilateral relations with Turkey.[3]

The statement contains several clichés from the genocide narrative concerning the 1915 Events and makes no attempt to consider what the Turkish side has to say on the matter. However, experts and scholars of this topic who are committed to academic integrity will highlight that the events that happened more than a century ago within the Ottoman Empire were far more complex than this, which involved both Armenians and Turks as perpetrators and victims. In this sense, the genocide narrative has degenerated into a propaganda tool detached from historical and legal facts, used to paint a black and white picture that demonizes Turks so that militant Armenian nationalists can avoid facing the ugly truth of what happened in the past. With such propaganda, the militant Armenian nationalists can continue to fool themselves, their own people, and third parties, which serves as a deadlock in the elusive Turkish-Armenian reconciliation.

Due to the nature of the genocide narrative and severity of the accusation of genocide (considered by the international community as the worst type of crime), Biden’s statement transcends from being an attack on the Turkish government (as argued by some commentators) and becomes a wholesale attack on the Turkish people and their identity.

The statement makes no mention of Turkey and claims that it is not seeking to “cast blame”, which may be interpreted as the US administration’s attempt to put distance between the message of the statement and Turkey and thus lessen its severity. However, because the genocide narrative has been specifically formulated as a weapon to target Turkey and Turkish identity, it does not matter whether Biden’s statement makes no mention of Turkey. As such, the absence of a reference to Turkey does not in any way lessen the severity of the essence of this statement.

The statement contains the following expression: “A world unstained by the daily evils of bigotry and intolerance, where human rights are respected, and where all people are able to pursue their lives in dignity and security.” Taking a step back and examining the global conjuncture (Western media coverage, politicians’ rhetoric etc.), one will realize that this statement itself has been shaped by bigotry and intolerance, because it feeds off the Turkophobic and Islamophobic sentiments that are on the rise not only in the US but also the rest of the Western world.

While the Armenian American community (one of the biggest and most affluent components of the Armenian Diaspora) has a large, well-established presence in the US, this only partially explains why the American public takes at face value the studies that reflect Armenian views and goals, while seeking to dismiss or outright ignore studies critical of this approach. Such automatic reactions that favor the approach of one group over another always entail prejudice. Although not openly discussed, the American public has harbored a deep-seated prejudice against the Muslim Turk from the beginning,[4] a legacy of the founding of the United States by devout Christians from Europe who viewed the Ottoman Empire as a mortal enemy. This historical prejudice has been compounded in recent times by the highly negative coverage of Turkey by the American media because of the Turkey-US friction and the fear generated by the horrifically violent acts of terrorist groups such as DAESH/ISIS claiming to represent Islam.

Based on the media coverage and reaction that Biden’s statement has generated in Turkey, it will be apparent to any observer that the Turkish public is fully aware of the factors outlined above. While other countries’ politicians may have issued genocide statements and resolutions against Turkey in the past, the superpower United States is Turkey’s principal ally in the Western camp, leading to the expectation that the US should behave more responsibly in comparison to others in the same camp. In the context of the deteriorating relations between Turkey and the United States, Biden’s statement will have a highly negative, long term effect on Turkish public’s perception of the US, leading to serious questions over the US’ credibility as an ally. Such a harsh public reaction should come as no surprise, as the US President has issued a statement, formulated using long-discredited clichés and propaganda, that accuses the Turkish people’s ancestors of being cold-blooded mass murderers. How would the American public feel and react if another country’s leader issued a similar statement against the US?

In this sense, it is difficult to understand how Biden’s statement will enable people “to pursue their lives in dignity and security.” How will Biden’s statement facilitate dialogue between conflicting sides when one side is being slandered simply to appease the other side? What purpose will the polarization that will inevitably be generated from this statement serve in terms of US interests? What kind of message is this statement sending to the approximately half a million Turkish Americans living in the US? What explanation can Biden provide to justify such a statement that discriminates against the Turkish Americans?

It seems that the current US administration has decided that it is morally permissible to discriminate against Turkish Americans, just like it was considered morally permissible to discriminate against Native, African, and Japanese Americans in the past. These people were forced to fight long and hard to gain the public recognition that what was done to them was morally repugnant. Will the American politicians and public realize that what it is being done to the Turkish Americans is morally repugnant as well? In this context, knowing full well the dangers and injustice they are currently facing, over 30 Turkish, Azerbaijani, and Turkic American associations have issued a joint statement expressing “deep disappointment” and concern with Biden’s statement.[5]

The impending release of terrorist Hampig Sassunian, an individual of Armenian descent who murdered Turkish Los Angeles Consul General Kemal Arıkan in 1982 and subsequently imprisoned in the US, must also be considered. Many Diaspora Armenians idolize this man who has never expressed any regret for murdering an individual who was not even born when the tragic events of 1915 occurred. Sassunian murdered Arıkan simply because he was a Turk and because it would be used to generate propaganda for the militant Armenian nationalist cause. Biden’s statement showing support for the genocide narrative, coupled with impending release of Sassunian, will serve to fuel the extremist sections of the Armenian Diaspora who are seeking ways to reignite the wave of terrorism that targeted Turkey and its people in the 1970s and 80s.

Lastly, will the US President Biden issue statements on other controversial historical events as well? For example, will Biden recognize as genocide the massacre of the Herero and Nama people in Namibia by Germany in 1904-1908? What about the massacres of the Mapuche people carried out by Argentinian and Chilean forces in the 1870s and 80s? Would Biden like to comment on the massacre carried out by Armenian forces against the Azerbaijani population in Khojaly during the First Karabakh War or the extermination of the Turkish population of Peloponnese/Morea during the Greek campaign for independence?[6] These examples are given not to argue over their characterization as genocide or shift attention away from the 1915 Events, but to point out that politicians will pick and choose controversial historical events and issue statements as it fits their agenda. The US President Joe Biden, by resorting to such a disingenuous move, has dealt a tremendous blow to the Turkish-American relations that will not be forgotten.

*Photograph: Members of the Armenian Diaspora demonstrating in front of Turkey’s embassy in Washington DC after US President Joe Biden issued his 24 April 2021 statement - Source: Reuters

[4] For example, please see: Justin McCarthy, The Turk in America: The Creation of an Enduring Prejudice (University of Utah Press, 2010).

[6] AVİM, “The Greek Independence: Memory And Politics, The US President Rubs Salt To The Wound”, Center for Eurasian Studies (AVİM), Commentary No: 2021/38, April 26, 2021, https://www.avim.org.tr/en/Yorum/THE-GREEK-INDEPENDENCE-MEMORY-AND-POLITICS-THE-US-PRESIDENT-RUBS-SALT-TO-THE-WOUND