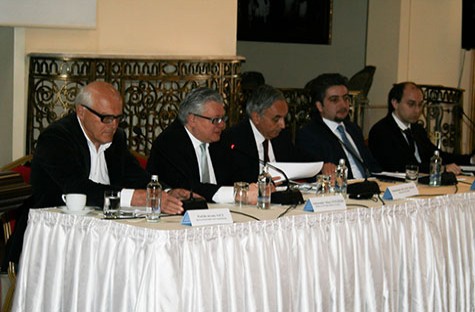 We are gathered here today to hold a symposium on the prospects for Turkish-Armenian relations. Today, ten esteemed speakers will give an account of their academic work that interprets recent history and the events of 1915-16 based on facts and documents at hand.

In the order in which they will speak, our esteemed speakers are as follows:

Altay Cengizer, Ambassador, general director at the Ministry of Foreign Affairs and author of the book titled (in English) In Light of Just Memory;

Jeremy Salt, formerly of the Department of Political Science of Bilkent University;

Maxime Gauin, researcher at the Center for Eurasian Studies and PhD candidate in History at Middle East Technical University;

Professor M. Hakan Yavuz, of Political Science at the University of Utah;

Uluç Gürkan, author of the book titled (in English) The Malta Tribunals, journalist and former Deputy Speaker of Grand National Assembly of Turkey;

Considering that a number of our speakers have come from abroad, I would like to extend our heartfelt gratitude and I have the distinct pleasure to welcome all of you.

We, at AVIM, have never considered ourselves to be “denialist”. We are an independent think tank, not swayed by emotions, political or other influences. We try to be as objective as possible on an intellectual level.

We object to the Armenian allegations on three main grounds:

1) Presentation of the events during the First World War as genocide,

2) The numbers game and the multiplication on the number of the Armenian casualties with a view to further dramatizing the wartime losses,

3) Denial of the sufferings of the Turks at the hands of the Armenians during the revolts and conflicts prior to the war and later in collaboration with the Tsarist Russian army in the east and the French army in the south.

We are prepared to discuss these three main objections with anybody, anytime, anywhere. However, to this date, we have failed to see any Armenians or their supporters expressing the will to openly discuss these objections. The truth is, when the facts and realities are put forth, the real denialism is laid to bare. People become unwilling to lose ground in terms of academia when they have previously gained ground in terms of politics. This is a political choice that Armenians and their supporters make, but they have come to realize that political gains and political arguments have their limitations in the face of historical facts and legal realities.

This is exactly why we gather here today to listen to historical and legal facts, and search for a way forward for available means for reconciliation on a politically controversial issue.

I thank you all for being here.

At the end of this symposium, I would like to make some short remarks.

The first one concerns genocide allegations.  Although the 1948 Convention cannot not be applied to the events of 1915, the definition of genocide of its Article 2 is the only criteria to determine whether an event is genocide or not.

At the genocidal intention of the Ottomans cannot not be proved beyond doubt, as required by the International Court of Justice, to insist that the resettlement of the Armenians was in fact genocide has no legal meaning.

There is a new tendency to consider these events as crime against humanity. As a matter of fact, the Rome Statute of International Criminal Court article on forcible transfer of population seems to fit the events. But we should have in mind that the Rome Statute is applicable only to the events that occurred after its entry in force. On the other hand, in case of abuse of this article, Turkey and Azerbaijan could indicate that the articles of the Statute concerning murder and torture fit the events that took place 1992.

The main and insurmountable difficulty concerning genocide allegations is to try to apply to the events of 1915 the news norms of international law which did not exist at that time.

Since the Ottoman Empire collapsed and the Ottoman officials who took the decision of the Armenian resettlement are all dead, many assassinated by hand the Armenians terrorists, Armenians allegations become ones without addressees. To remedy to this, longtime ago, Armenians activists tried to create a new concept that I would like to name as “hereditary guilt”, which means that a person is responsible of the acts of his/her forefathers.  This is a very primitive conception of justice and such a crime does not exist in modern law. On the other hand, in order to incriminate the Turkish Republic with the events of 1915, it is alleged that the modern Turkish Republic, being the successor of the Ottoman Empire, should be accountable for these events. However, the Turkish Republic, as successor of the Ottoman Empire, is responsible for the obligations of this state like its debts for example, and not for its political decisions that the Turkish Republic criticized and many of them it even condemned.

I think that we should work much more on the legal matters and perhaps organize in the future a comprehensive conference on the legal aspects of the Armenians genocide allegations.

Another subject that I would like to raise is the Armenian demands emanated mostly from Diaspora and supported (up to now unofficially) by the Armenian State.

The first demand is the recognition of genocide allegations by Turkey. I have already gave my mind on that subject.

The second one is compensation or indemnities to be paid to the descendents of the resettled Armenians. Every claim to be fulfilled should have legal base.  Resettled Armenians, as Ottoman subjects, depended on Ottoman legislation which did not foresee any compensation for them.  As far as international law is concerned, there is no such a provision in the Treaty of Kars or in any other international treaty on this issue. I should also mention that in the Diaspora, fantastical compensation figures are advanced ranging from 44 to 104 billion dollars, even to 800 billion dollars.

The third one is the restitution of the resettled Armenians properties. It is overlooked most of the time that just after the First World War, for a period about four years, the Armenians easily took back their properties. The Turkish Republic has adopted many legislative texts on the vacant properties that I cannot summarize right now. But I could say that the main point is to apply to the courts. On the other hand, due to the fact that a long time has passed, many of these properties now belong to the state.

On this subject, I would like to remind that the Turkish government is restoring some Armenian churches which have historical and artistic values, a policy that I applaud and wish for its continuation.  Armenians insist that their churches and other religious buildings should be returned to the Armenian Patriarchate. I find this logical as far as there is enough persons to attend religious services.

The most important Armenian demand is Turkey giving land to Armenia. This is basically a Diaspora demand. The Armenian government tries to be vague on this subject, knowing well that nobody, except maybe South Cyprus, will support them and their insistence on this topic could depreciate their others demands. Needless to say, that The Treaty of Kars of 1921, which fixed the North Eastern borders of Turkey, is still valid and no state is contesting this validity.

The only Armenian demand that concerns today is the opening the Turkey-Armenia border. This border was closed in 1993 to deter Armenia from occupying Azerbaijani lands.

As Armenia continues to occupy these lands, there is no reason for Turkey to open its border. If it is done, I am sure that Armenia, having received what they wanted the most, will not bother to solve its problems with Azerbaijan, believing that Russia will assure its security.

Faced Armenian aggressive and increasing demands, Turkey, especially in the last years, adopted a conciliatory policy like the then Prime Ministers Erdoğan’s statement of condolences of the last year and Prime Minister Davutoğlu message of this year for to the death Armenians. These good will messages apparently did not or do not have any effect on the Armenians who refused in fact the olive branch offered to them.

Few days ago, the centennial of the Armenian resettlement during the First World War was commemorated all over the word and especially in Armenia in a most pompous manner. It is not clear to me, except to influence its public opinion, what are the advantages for Armenia of these ceremonies as no new initiatives are taken and no new demands are formulated for resolving their conflict with Turkey.

After the euphoria created by these commemorations, Armenians all around the world will realize that nothing has changed. Especially the Armenians of Armenia will see that their economic conditions remain the same. There is no change on Turkey’s stance on major problems like genocide allegations, its territorial integrity, indemnity and the evacuation of Azerbaijani lands etc. and that Azerbaijan is always determined to take back their lands.

For the future, it is not expected that Armenia in the short term will change its excessive policies.

In case its membership to Eurasian Economic Union will not fulfill its expectations, continuous emigration and further economic decay in addition to the Azerbaijan enrichment and Turkey’s already powerful position could induce Armenia to solve its problems, at least partially, with its neighbors.

So, in a contradictory way, it will not be Armenia’s success but its failure that could lead to a future reconciliation.