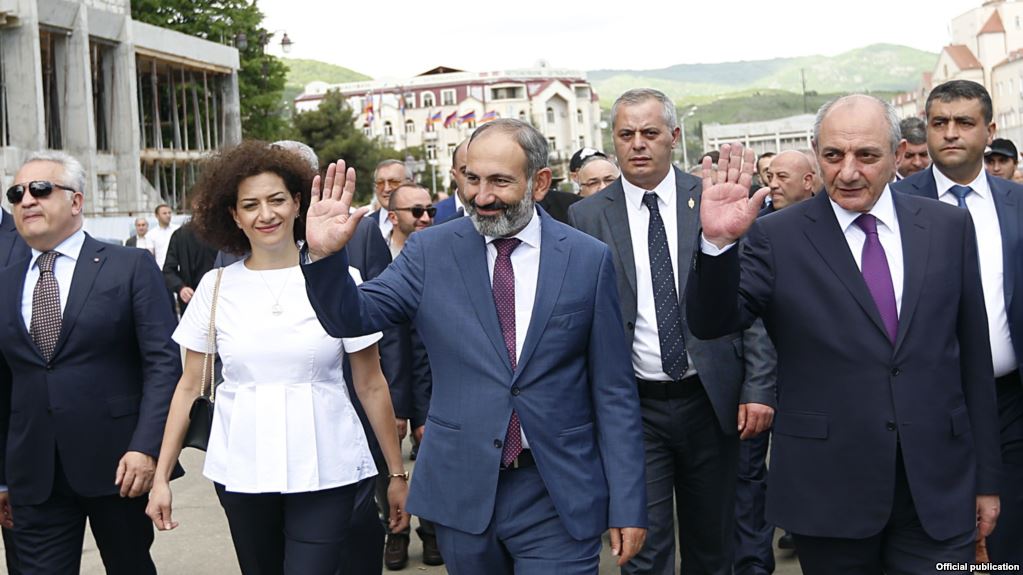 Nikol Pashinian paid his first visit after his election as prime minister to Nagorno Karabakh on May 9th. Pashinian made some statements on the future of the Turkish-Armenian relations and his Karabakh policy at Hankendi (Stepanakert) in Nagorno Karabakh which has been occupied by Armenia for a long time. It seems possible to make several conclusions about the foreign policy that Pashinian might pursue in the near future based on these statements. For this reason, it is necessary to first of all look closely at his statements on Turkey and on Karabakh.

Pashinian said about Turkey in his statement that[1];

"[Turkey] ties this precondition to its relations with another country, [Azerbaijan]. We don't expect them to recognize the genocide either. We show efforts for this issue to gain international recognition. And we do this for this tragedy to not to be repeated again,"

As it known, this kind of statements are often repeated in Armenian politics. For example, Serzh Sargsyan said that Turkey’s attitude with putting preconditions in front of Armenia harms the spirit of Zurich Protocols during his speech at the 72nd session of United Nation General Assembly.[2] And then he declared the protocols null and void unilaterally.[3] The statement of Pashinyan who came into power with a civil movement and claims to be creating a new order in the country is in some way a repetition of the old rhetoric. The statement of Pashinian being supportive of the normalization of the bilateral relations without preconditions is, in fact, nothing more than a phrase which is constantly expressed in Armenia and which is not new at all, as well as an expression of the same words. Thus, at this point, it seems that there are no changes on Armenia’s policy towards Turkey.

Moreover, his first official visit to Nagorno-Karabakh right after his election as Prime Minister and the timing of the visit are also meaningful. May 8 is the day when Shusha - city in Azerbaijan - was occupied. On the anniversary of Shusha's occupation, Pashinian stated that Nagorno-Karabakh's right to self-determination should be recognized by Azerbaijan. He noted that he supports the peace negotiations on Karabakh, but that the de facto Armenian government in Nagorno-Karabakh has the right to represent itself in these negotiations.[4] He pointed out that this is why Armenia would no longer express any concerns about the rights of Karabakh.

Therefore, Pashinian doesn’t offer a new opening for the Karabakh conflict. He intends to sustain the policy which has not gotten any positive results until now. In this context, he is trying to present this situation as a problem between Azerbaijan and illegal and the de facto government of Karabakh. However, it must not be forgotten that the existing occupation in Karabakh is an invasion conducted by Armenia. In fact, the UN resolutions numbered 822, 853, 874 and 884 which were adopted during the Nagorno-Karabakh War confirm that Armenia and the Armenian forces were the actual aggressors and occupants.[5] On the other hand, in the case of Chiragov and the Others/Armenia it was ruled by the European Court of Human Rights that the defendant was the Republic of Armenia.[6] It is confirmed that Armenia is clearly the occupant in Karabakh from the term of active control in the decision’s text. In the records of the trial, it is stated that the so called administration of Nagorno Karabakh is not independent or autonomous and it is dependent on Armenia militarily, politically and economically. In conclusion, Pashinian’s efforts to present the Karabakh issue as a problem between Azerbaijan and Karabakh’s de facto administration is doomed to stay resultless.

Lastly, Pashinian’s statement that he will make an effort to make the 1915 events recognized as a genocide in the international area shows that the old attitude in the relations with Turkey will be continued. Such efforts like that aim to put pressure on Turkey. A policy that will be pursued through carrying these contraversial historical events that do not have a valid ruling onto the international platform shows that Pashinian has not adopted a different policy from his predecessors.