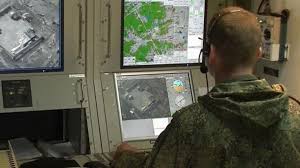 After immediate implementation of the 10 November 2020 ceasefire agreement signed by Azerbaijan-Armenia under the mediation of Russia, the joint monitoring center, which was agreed between Russia and Turkey to be set up according to the Memorandum of  Understanding, started its mission on 30 January 2021. The Joint Monitoring Center is located in the Agdham district which is situated 40 minutes away from Khankendi and was evacuated by the occupying Armenian forces on 20 December 2020. 38 military staff were deployed in this Center under the command of major General Abdullah Katırcı. On the other hand, major General Viktor Fyodorenko commands the Russian army. The security of this center is provided by the Azerbaijani Army[1].

Neither Russia nor did Turkey reveal any detailed information on the mission of the joint monitoring center. With the opening of the Center, some information has been reflected in the press. First of all, in addition to separate monitoring rooms for Turkish and Russian units, there is also a common observation room for the mission at the Center. It is understood that the information gathered from there will be sent directly to Moscow and Ankara. Although it is still uncertain whether Turkish soldiers will participate in patrol duties, it is known that they will undertake air monitoring via UAVs[2]. It seems that remote observation and recording activities will be carried out by UAV’s controlled by the Turkish Army especially in cases where the patrols conducted by land forces would fall short in accordance with the field conditions and the distance of possible crime scenes.

Of course, the most important mission of the center established here will be to protect the ceasefire regime until a lasting peace is achieved. As a matter of fact, after the agreement signed on 10 November, there were no significant violations in the region protected by the Russian peacekeeping force. However, the continuing political turmoil in Armenia and the danger of the revival of extreme movements such as taking back Nagorno-Karabakh makes the task of the center even more critical. In addition to the extremist statements of the Armenian Revolutionary Party, as mentioned in the article titled “Armenian Terrorism Begins to Show Its Face Again[3]” which was published in AVİM, there are possibilities for the ASALA threat to be revived. The threat of terrorist activities being conducted by the terrorist organizations such as ASALA, primarily in the Nagorno-Karabakh region and in Azerbaijan, with the aim of triggering another gunfight in Nagorno-Karabakh, is a situation that should be monitored seriously. From this perspective, the necessity of the regional cooperation for peace keeping is emerges in addition to the Turkish-Russian Joint Monitoring Center’s task. On February 1, Dmitry Medvedev, the Russian Security Council Chairman, stated that the cooperation between Turkey and Russia in Karabakh is not an element of some long-term policy[4]. In the short and medium term, the coverage of the Center's task and mission seems essential for regional security.

From this point, the cause of Turkey conducting observation more from the center than the field within the framework of the Joint Monitoring Center observation mission is better understood. Likewise, during the negotiations between Russia and Turkey on the location of the common center’s establishment and its task description, the Armenian public opinion displayed a harsh response to the situation. Thereupon, Russian Foreign Affairs made a statement that the Turkish-Russian joint patrol would not take place and the center would not be situated in Nagorno-Karabakh lands. When considered together with the threat of terrorist organizations becoming operational again, Turkey being included in the monitoring process through UAVs, clearly indicates that jeopardizing the peaceful environment in the region is not wanted.