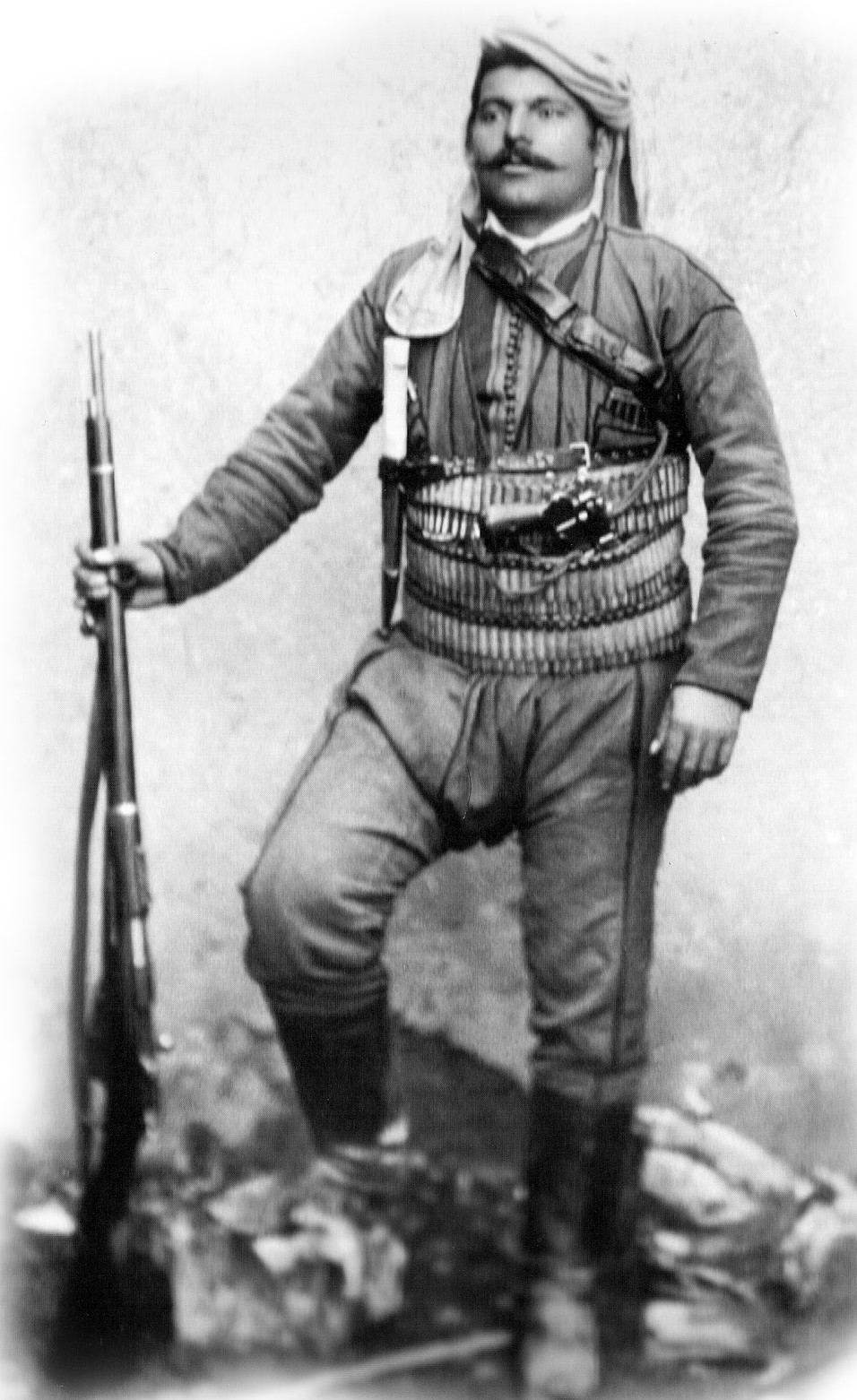 Murad Khrimian (Murad of Sebastia/Sepastatsi Murad) was an Armenian fedayee (irregular fighter) who is not nearly known as much as the infamous Dashnaksutyun fedayee leader Andranig Ozanian. While Murad was described as one of Andranig’s most faithful and trusted associates[1], there seems to be insufficient scholarly studies on him. Interestingly, it is stated that there were two Murads from Sivas, the other being a Hunchak leader and parliamentarian, Hamparsum Boyajian. According to an article in the April 1987 issue of the Armenian Hye Sharzhoom newspaper, there were only two books about Murad Khrimian published after his death. It was written that Murad never spoke about himself, while other Armenian “great heroes” like Andranig had their memoirs published.[2]

One of the few works that include the life and actions of Murad is Andranig Chalabian’s book titled “Revolutionary Figures”. The discourses and footnotes used in Chalabian’s chapter for Murad indicate that his book is a partisan source with highly questionable reliability. Nonetheless, its strikingly biased descriptions (used for Murad, the Armenian fedayeen and civilians, the Turkish government and officials, etc.) makes it an interesting source that can be quite informative with regards to demonstrating the radical Armenian nationalist mentality. An important source that Chalabian used for his description of Murad is the 1931 book on Murad written by Mikael Varandian. Since Varandian was the Dashnaksutyun’s (Armenian Revolutionary Federation - ARF) historian, it can be safe to assume that neither Varandian’s, nor Chalabian’s work on Murad are historically objective.[3]

Depictions Of Murad The “Hero”

Murad was described as an Armenian fedayee who initially joined the Hunchak Party, but became a Dashnaksutyun member afterwards. Among the numerous characterizations made concerning Murad was that he was a famous marksman, swordsman and wrestler. While it was added that he was described as an uneducated nationalist villager, there are various cases in which he was depicted as a responsible, humble, self-sacrificing, fearless, far-sighted, knightly, immortal fighter and “the terror of the Turks”, “roaring lion of Kafan”, “brave son of Sebastia”, etc.[4]

Themes of bravery, selflessness, struggle, injustice, admiration can be seen often while reading the various explanations in the chapter. He was described as being on the front lines when fighting and in the rear guard during the withdrawal from Erzincan. According to various descriptions in Chalabian’s chapter, Murad became one of the strongest pillars in the Armenian revolution’s formation and his various actions had significant influences in the war efforts against the Turks. For example, while holding a hill during his last battle, Murad was described to have prevented the advance of the “enemy” toward Baku, the city’s capture and the massacre of its Armenian residents. Murad was a part of various rebellions, such as the Second Sasun Rebellion in 1904. It is also claimed that he was remembered by the Armenian side for his humanitarian deeds, such as rescuing, rebuilding homes, forming orphanages, using the slogan “One Armenian, one gold piece."[5]

On one hand, there are numerous explanations portraying him as a loyal ally of Andranig. On the other hand, Murad was also characterized as a just-minded and kind hearted individual who did not permit his companions to kill innocent Turkish women and children.[6] Murad being one of Andranig’s (an Armenian commander responsible for wide scale atrocities against the civilian Muslim populations) closest comrades and a firm believer of his leadership constitutes enough reasonable cause to cast doubt on his refusal to allow Turkish women and children to be killed.[7] Additionally, Chalabian adds in his chapter titled “Fall of Erzurum and Loss of Armenia to Turkey” that, during the retreat from Erzincan, Murad and Sepuh commited “acts of vengeance” against the “inhabitant population of the enemy”. Murad’s acts were described as a “regime of terror” and protested by German Ambassador Count Bernardov of Istanbul, former German Consul Anders of Erzurum, and Secretary Lord Curzon of the British Foreign Office.[8] Furthermore, according to an article in the 57th issue of the Ermeni Araştırmaları journal, the Dashnak fedayeen Murad, Mirmanof, and Mazmanof organized raids against many Muslim villages in Western Arpaçay (in Eastern Anatolia) in 1919 and 1920. In these raids, the Dashnaks would shoot or burn villagers, loot their money and property, wreck or burn their houses, and kidnap girls. The archive documents on these Dashnaks atrocities were prepared as a result of the investigation which was initiated upon the written order of the Eastern Front Commander Kâzım Karabekir Paşa.[9]

One of the chapter’s striking claims was that the “diplomat-sharks of the great western powers” had strived to “cover up the beastly acts of the Turks” while constantly giving wide coverage to “even the most minor acts of vengeance by Armenians”.[10] However, the source of this explanation appears to be Chalabian’s book titled “General Andranik and the Armenian Revolutionary Movement”. Moreover, some examples can be given from reliable sources stating that the opposite case was the truth. For instance, AVİM referred to Guenter Lewy in a previous article regarding how pro-Armenian eyewitness reports received wide publicity throughout the West as the war ended while any information without a negative bias against the Turkish side was being suppressed or distorted.[11] It is also odd that claims were made of Western “diplomat-sharks” implementing “double standards” against the Armenians, while it is written on a previous page that the British ambassador in Istanbul had played the main role in getting Murad out of the Ottoman Empire after an incident that started with Murad joining a Hunchak protest against Armenian Patriarch Ashekian.[12] A possible contradiction comes to mind when reading such depictions in the book.

According to Chalabian, one of the numerous attempts by Turkish officials to kill Murad was through a plot involving the criminal Çerkez Ahmet. Allegedly, Çerkez Ahmet was sent to Murad’s village to murder him, but the failed attempt ended with him being beaten by the villagers and dying from his wounds afterwards.[13] However, Lewy explained that the Turkish officer Çerkez Ahmet, who had been accused of atrocities against relocated Armenians and for the murder of two Armenian members of parliament (Krikor Zohrab and Seringulian Vartkes), was arrested on Cemal Paşa’s request, tried by a court-martial in Damascus, and sentenced to death by hanging.[14]

One reason why Murad initially joined the Hunchak Party is stated to be his wish to kill Mushegh from Muş, who was a former Hunchak that became an informer. In addition, the ARF Kars Committee that offered Murad membership “needed Murad in order to submit the regional informers and traitors to terror, as well as to perform other missions”. He was also sent to the Caucasus to extort money from the wealthy in the name of the “liberation movement”. Murad was a member of the “Temptest” band, which was established with the decree of ARF co-founder Kristapor Mikaelian[15]. Murad was also among the many Armenians who sent word to their people to not offer soldier conscripts to the Turkish army, to avoid military service, to “fight, resist and to die with honour”. Various sections portray Murad as playing an influential role in the transfer of weapons to the Armenian fedayeen, the arming of villages, and the organization of “self-defense” for the region’s Armenians.[16]

The previously mentioned incident involving Patriarch Ashekian is also a case that reflected how the radical Armenians viewed Armenians who did not share their fanatical beliefs. Ashekian, who publicly defamed Armenian insurrectionists, was described as a “mean-spirited and unpopular” figure. Thus, the Hunchak Party incited the Armenian people to protest him at the St. Gregory Church of Galata. Soon after the protest, violence broke out between the protestors and the police. Murad took part in the violence and eventually took refugee in the Galata Church for nearly a month. During this time, Murad stated that he would yield only to European ambassadors.[17]

Accusations were also made against Russia. The “despotic black paw of the Tsars” was described as constantly preventing the Armenians from gaining their freedom. The Armenians and the Russians were depicted as two neighbours and Christian peoples with the Muslims being their common enemy. It was claimed that even a slight approval from the Russians could have resulted in a disproportionate increase in the possibility of success for the “Armenian liberation movement”. Similarly, it was argued that in 1918, all means were available to “make the defense of Erzurum the crowning glory of Armenian Liberation Movement”. The rough period of political, economic, military detriment in the Ottoman Empire was described as “the golden opportunity [...] at hand to liberate Turkish Armenia, at least the eastern part of it”.[18]

Furthermore, it is alleged that the Russian General Odishelidze negotiated a treasonable relationship with the Turks.[19] However, according to the telegraph correspondence between Odishelidze and the 3rd Army Commander Vehib Paşa, the General displayed a degree of indifference towards the incidents of Muslims being killed by Armenian gangs in Erzincan. Moreover, the leader Murad and his supporters in Erzincan acted as they pleased. In January 1918, Murad ordered for the Muslim population in Erzincan to be gathered at the church area, and for arrests, executions, torture, and burning of houses.[20]

It is expressed that Murad succeeded in organizing the “self-defense” of the Sivas region in 1909 as a result of him re-doubling his efforts and his persistent warnings. According to a statement by his compatriot Armenak Mikaelian, their efforts included preaching, pleading, and threatening. However, it is also depicted that Murad had failed in his persuasion attempts for a rebellion in Sivas due to the calls for cooperation and patience by the Armenian Patriarchate of Istanbul and Armenian “slave-minded bigwigs” that served the government.[21]

The choice of words in the book’s explanations alone can reflect how the radical Armenian mindset embodied animosity towards the Turkish government and Muslim population. According to the radical Armenian outlook, the Armenians were battling against the “barbarity and unlimited capriciousness of the Turks, Kurds, Tatars and Circassians”. Additionally, it was asserted that, in the period of the 1905 Armeno-Tatar war, the Russian authorities were “secretly making every effort to incite the Tatar mobs to carry out their natural beastly instincts against the Armenians”.[22]

One can look at Chalabian’s chapter footnotes and see that virtually all his sources are Armenian. While these sources do include Dashnak memoirs and diaries, such sources can be a valid reason for the reader to doubt their objectivity. Observing such sources describing an Armenian fedayee with such reverence and the Muslims with disdain can be considered as a cautionary case on the dangers of shortages in objective historical studies regarding some Armenian figures who engaged in barbaric acts.

Lastly, Haig Beloian, the author of the aforementioned article on Murad in the Hye Sharzhoom newspaper in 1987, wrote that he had close contacts with Murad. Beloian ended his article with a call to Armenians, reflecting the radical Armenian mentality towards Hai Tahd (Armenian Cause):

“If we want to win our sacred lands back some day, the only way would be to back our leaders like Antranig and Murad and fight for it.

The Hye Tad must be won. Let us all know more about our many past heroes. Let us know each other more, so that we can work together instead of suspecting each other which only causes disunity.”[23]

Criminals and terrorists being depicted as heroes gives us a better understanding of the working of the minds of radical Armenians, who unashamedly continue today with those narratives often seen in the ARF statements.

[15] Chalabian, “Revolutionary Figures”, p. 272, 274. For more information on Kristapor Mikaelian, please see: Ahmet Can Öktem, “Co-Founder Of The Armenian Revolutionary Federation And One Of The Precursors Of Armenian Terrorism: Kristapor Mikaelyan”, Center for Eurasian Studies (AVİM), Commentary No : 2021/34, April 14, 2021, avim.org.tr/en/Yorum/CO-FOUNDER-OF-THE-ARMENIAN-REVOLUTIONARY-FEDERATION-AND-ONE-OF-THE-PRECURSORS-OF-ARMENIAN-TERRORISM-KRISTAPOR-MIKAELYAN