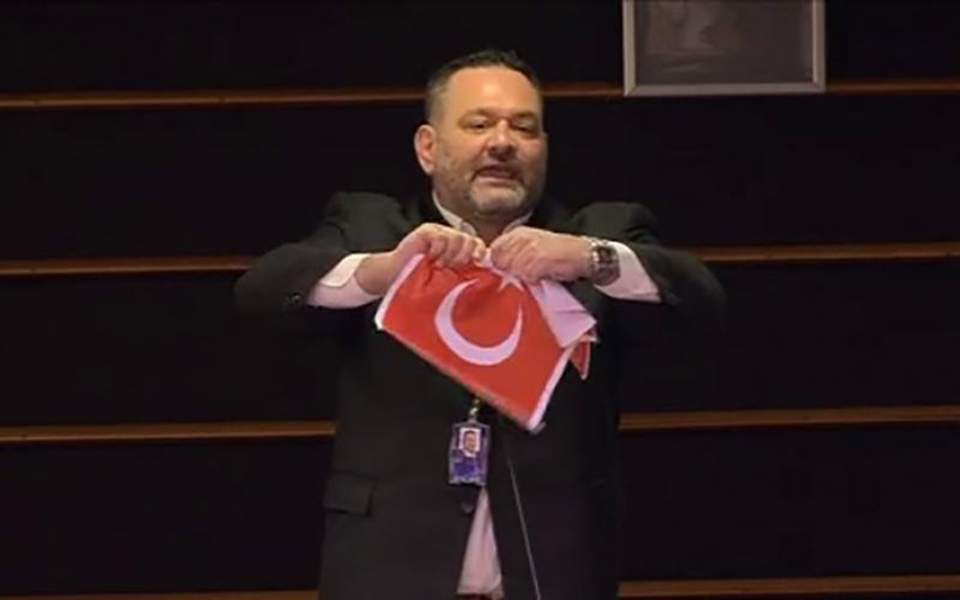 At the beginning of this year on 30th January 2020, Greek Member of European Parliament (MEP) Ioannis Lagos, as addressing the parliament, tore down a Turkish flag after accusing Turkey as a source of illegal migration flowing to Greece [1]. Ioannis Lagos is currently an independent MEP. In Greece, he is the leader of the National Popular Conscience, a splinter group that emerged after the disintegration of neo-Nazi Golden Dawn party of Greece [2]. Turkey's foreign minister Mevlüt Çavuşoğlu, wrote on the same day of this unfortunate act on twitter that “These racist minds know better than anybody how we crash and kick out to the sea those who dare attack our glorious flag. Europe’s spoiled and racist children should know their place. Europe must put an end to racism and animosity against Islam” and expressed his expectation that “(the) European Parliament to take necessary measures against this clown” [3]. As a very rare reaction, the Greek Ministry of Foreign Ministry has also condemned this action through a statement. The statement said that “Greece condemns in the most categorical manner any act of insulting a national symbol and in this case the national symbol of Turkey. The unacceptable actions of the representatives of neo-Nazism are a departure from Greek and European traditions and are an attempt to attract attention to Golden Dawn, which is on trial, and which Greek society has pushed out of Parliament with its vote”[4].

According to the Greek press reports, the mentioned Greek MEP was penalized by the European Parliament. As per the reports, he was “ordered to pay a fine of 2,261 euros, which was said to be the equivalent of his weekly paycheck, also banned from the assembly for four days” [5].

At the beginning of October this year, after a trial lasting more than five years, the leadership of Greece's neo-Nazi party Golden Dawn has been convicted of running a criminal organization [6]. A week later of this conviction, an Athens court sentenced the leaders of Greece’s Golden Dawn party and other former members of Parliament for Golden Dawn to 13 years in prison. One other former lawmaker who was among the party leaders was sentenced to 10 years in prison. The group’s remaining 11 former lawmakers received prison terms of five to seven years [7].

According to the European Parliament Rules of Procedure, the mandate of an MEP is a national mandate and cannot be taken away by any other authority. Moreover, the lifting an MEP's immunity is not a "guilty" verdict. It merely enables the national judicial authorities to proceed with an investigation or trial. And as MEPs are elected under national electoral law, if an MEP is found guilty of a criminal offence, it is for the member state's authorities to decide whether his or her mandate is therefore voided [11]. It seems that to lift Ioannis Lagos’ immunity may take months. We will follow with curiosity how the European Parliament which is a self-proclaimed beacon of democracy fond of giving lessons to Turkey will deal with this problem, and whether it will extend an official apology to Turkey for the acts of this criminal personality.