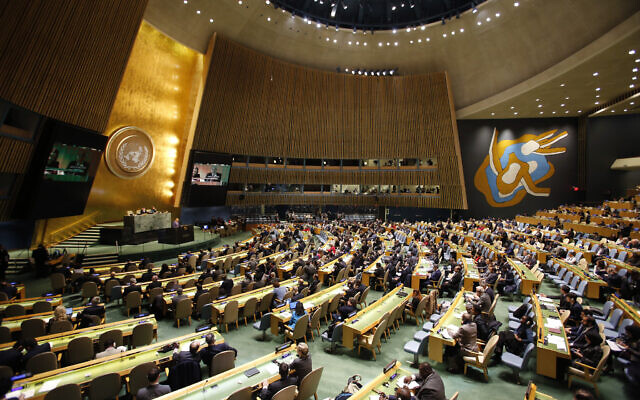 United Nations General Assembly (UNGA), on January 20, 2022, adopted a resolution regarding the Holocaust denial and rejected and condemned "without any reservation any denial of the Holocaust as a historical event, either in full or in part."[1] Resolution in its preambular part emphasizes the positive role of exercising the right to freedom of opinion and expression and full respect for the freedom to seek, receive and impart information for strengthening democracy and combating religious intolerance. It reaffirms the exercise of the right to freedom of expression. The resolution also states that freedom of expression involves special duties and responsibilities, therefore be subject to certain restrictions, but that these shall only be such as are provided by law and are necessary for respect of the rights or reputations of others and the protection of national security or public order, or of public health or morals. It further underscores that "all measures taken must be in full compliance with international human rights law, per article 19 of the International Covenant on Civil and Political Rights."[2] Finally, the resolution reaffirms that the Holocaust  resulted in the murder of nearly 6 million Jews, 1.5 million of whom were children, comprising one-third of the Jewish people, and draws attention to the international legal basis of the Nuremberg Tribunal judgments regarding the Nazi perpetrators of the Holocaust as follows: "Reiterating the principles of international law recognized by the Charter of the Nürnberg Tribunal, and taking note with appreciation of their codification by the  International Law Commission in 1950."[3] It should be mentioned that the Charter of the International Military Tribunal is an Annex to the Agreement for the prosecution and punishment of the major war criminals of the European Axis. [4]

The Holocaust, as is well-known, took place during the Second World War period, and the officials of Nazi Germany responsible for the Holocaust were convicted by the International Military Tribunal in Nuremberg in 1946. However, as it was explained in AVİM Research Paper titled "Degenerating Discursive Attempts in the Balkans to Alter the Legal Definition and Content of the Concept of Genocide," on December 11, 1946, one year after the final armistice, the U.N. General Assembly unanimously passed a resolution which stressed that "the punishment of the crime of genocide is a matter of international concern," and affirmed that "genocide is a crime under international law which the civilized world condemns, and for the commission of which principals and accomplices whether private individuals, public officials or statesmen, and whether the crime is committed on religious, racial, political or any other grounds - are punishable." resolution also requested the Economic and Social Council "to undertake the necessary studies, to draw up a draft convention on the crime of genocide to be submitted to the next regular session of the General Assembly. In the ensuing period, "The Convention on the Prevention and Punishment of the Crime of Genocide" (Genocide Convention) was adopted by the General Assembly of the United Nations on December 9, 1948,[5] and entered into force on January 12, 1951.[6] In this regard, the term "genocide," in the international law context, is a legal term that found its place in the legal terminology through the Genocide Convention. Thus, the Genocide Convention, which is the only and fundamental legally binding treaty in the context of international law on the establishment of the existence and punishment of genocide is, in any event, can not be applied retrospectively.[7] The 1948 U.N. Convention on genocide, as explained in AVİM Research Paper mentioned in footnote four, is drafted basically in response to the Holocaust. Therefore, the term can only be applied to tragedies after the Holocaust.

As can be seen from the recent U.N. General Assembly Resolution mentioned above, the international legal ground of the condemnation and rejection of the Holocaust denial is clearly explained in the resolution through reference to codification by the International Law Commission in 1950 of the Charter of the Nürnberg Tribunal. With this reference, UNGA has not linked the punishment of the perpetrators of the Holocaust only to the Charter of the Nuremberg Tribunal but also referred to the International Law Commission's decisions to make it valid internationally. This legal rigor demonstrated by the UNGA in its Resolution on Holocaust denial is an example that indicates the groundlessness, arbitrariness, and injustice of the baseless, purely political, obsessive, and ignorant accusations of genocide leveled against some nations on the pretext of tragic events that took place long before the 1948 Genocide Convention entered into force.

As per the press reports, Israel and Germany jointly proposed the UNGA resolution on Holocaust denial. [8] It is mentioned in the reports that the resolution was adopted at the 80th anniversary of the Wannsee Conference, when Nazi leaders met at a villa on the shores of Berlin's Wannsee lake to discuss the systematic murder of up to 11 million Jews in Europe. [9] According to a press release of the German Permanent Mission to the U.N., with this resolution, "for the first time in a U.N. resolution, a definition of what constitutes Holocaust denial could be included." [10] It is also reported the statement made by Israel's U.N. Ambassador Gilad Erdan in the Assembly who  said that "we now live in an era in which fiction is becoming fact, and the Holocaust is becoming a distant memory,... as this happens following the greatest crime in human history, now comes the greatest cover-up in human history." He further said that the resolution preserves the memory of the 6 million victims and is a commitment to make sure that Holocaust distortion and denial will be tolerated no more. According to the news, Israel's Permanent Representative also criticized social media platforms such as Facebook, Twitter, and YouTube that spread the pandemic of distortions and lies about the Holocaust, emphasizing that social media giants can no longer remain indifferent to the hatred spreading on their platforms, and said that these platforms should take immediate action on this issue. [11]

Iran's representative disassociated his country from the resolution although it did not block the passage of the text. Strongly rejecting the attempt to misuse the concept of the Second World War to provide cover for the continuing practices of racism and expansionism, he said: "The Israeli regime has applied both in its policies and practices over seven decades." Its brutal crimes against Palestine, which include ethnic cleansing, an inhumane blockage and forced evictions, have continued, he said. [12]

As per the Deutsche Welle report, German Foreign Minister Annalena Baerbock has also made a statement and said that "even 80 years after the Wannsee Conference, it was essential to remember how German diplomats became complicit in Nazi crimes." While commemorating the victims of the Holocaust, she reminded them that "Officials from the Foreign Office who put themselves at the service of crimes and genocide by the Nazi regime are also to blame for their suffering" and vowed not to forget what Germany did the Holocaust victims. [13]

As the German Foreign Minister stated in her statement, will Germany never forget what it did to the victims of the Holocaust? According to the data released by the Arolsen Archives- International Center for Nazi Persecution about results of the Rheingold Institute study based on the principles of depth psychology exploring Generation Z's attitude towards National Socialism in Germany, the current generation of 16-25 years old (Gen Z) are much more interested in the Nazi era than their parent's generation (75% vs. 66%). However, when dealing with the past, Gen Z draws analogies with urgent problems facing society today, such as racism and discrimination. [14]

In our various AVİM analyzes, we have drawn attention to developments such as the rise of the extreme right in German society and the rise of Islamophobia, which can also be described as anti-Muslim racism. [15] In this context, it should be noted that there are justifiable reasons for German Generation Z to make  anology  between past developments and the urgent problems facing German society today, such as racism and discrimination, as stated above. In this context, we gave detailed information in our analysis about the neo-Nazi Nationalist Socialist Underground (NSU) terrorist organization that murdered ten people between 2000 and 2007, eight of whom were members of the Turkish community living in Germany.[16] In this respect, we pointed out that ten years after the NSU neo-Nazi terror cell was exposed, with the decision of the German Federal Court of Justice at the end of last year (2021), the NSU case was concluded legally, and despite the existence of a number of unanswered questions, the issue was legally closed. [17]

It is an apparent development that apart from the rise in Holocaust denial, racism, xenophobia, and Islamophobia are on the rise in Germany and most Western European countries. As we have emphasized in our various AVİM analyzes and comments, the combination of racism and xenophobia brings the concept of xeno-  racism, including anti-Muslim racism/Islamophobia, to the fore. These phenomena,  together with anti-Semitism, unite in a single discrimination structure. We can liken this structure to matryoshka dolls. As each piece unfolds, another type of discrimination emerges from within. The Holocaust constitutes the most painful and tragic example of human history among these phenomena.

January 27, 2022, was the International Holocaust Remembrance Day. On this sad occasion, as AVİM, we commemorate with deep respect millions of Jews, Roma people, disabled persons, as well as targeted minorities and groups, who were systematically murdered by the Nazi regime and its collaborators.

[3] United Nations, “Principles of International Law Recognized in the  Charter of the Nürnberg Tribunal and in the  Judgment of the Tribunal, with Commentaries” (Yearbook of the International Law Commission, 1950), https://legal.un.org/ilc/texts/instruments/english/commentaries/7_1_1950.pdf.

[4] This document, commonly known as the Charter of the Nürnberg Tribunal (or Nuremberg Tribunal) formed an integral part of the Agreement for the establishment of an international military tribunal, which was signed in London on 8 August 1945. United Kingdom of Great Britain and Northern Ireland, United States of America, France and Union of Soviet Socialist Republics, “Charter of the International Military Tribunal - Annex to the Agreement for the Prosecution and Punishment of the Major War Criminals of the European Axis (‘London Agreement’)” (United Nations, August 8, 1945), https://www.refworld.org/docid/3ae6b39614.html.

[5] Teoman Ertuğrul Tulun, “Degenerating Discursive Attempts In The Balkans To Alter The Legal Definition And Content Of The Concept Of Genocide,” Center For Eurasian Studies Research Paper Series, no. 3 (December 16, 2021): 9, https://doi.org/10.31219/osf.io/dpqs4 , https://avim.org.tr/en/Rapor/DEGENERATING-DISCURSIVE-ATTEMPTS-IN-THE-BALKANS-TO-ALTER-THE-LEGAL-DEFINITION-AND-CONTENT-OF-THE-CONCEPT-OF-GENOCIDE.