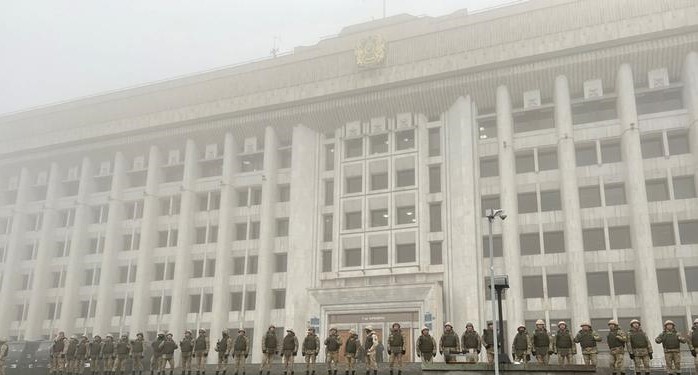 On 2 January 2022, the demonstrations that started in the cities Zhanaozen and Aktau of Kazakhstan in protest of the increases in fuel prices subsequently become more serious and spread all over the country. The crisis intensified due to the government’s inability to control the protests within a short time, leading to Prime Minister Askar Mamin submitting his resignation to President Kassym-Jomart Tokayev on 5 January. In his first statement, Tokayev expressed that he did not approve of the protests and that they would be dealt with the strictest measures. However, this statement did not calm down the protestors, and instead, the situation escalated. Upon the realization there was the danger of the situation getting out of control, Tokayev applied to the Collective Security Treaty Organization (CSTO) and conveyed his request to have forces sent to intervene in the incidents. While making this application, Tokayev defined the protests as the intervention of foreign powers and stated that terrorists trained outside the country were playing a role in these protests. It was indeed seen that some armed groups emerged during the protests. However, the main reason for these protests that had wide repercussions throughout Kazakhstan, a country rich in natural resources, were the inequalities in income distribution. The protestors declared that they were expressing their discontent with large-scale corruption, embezzlement and, favoritism, and with fact that no action was being taken towards meeting the real needs of the people (except for the big projects carried out for show in some major cities).

As of the evening of Friday, 7 January, the incidents started come under control. The authorization given by President Tokayev to the armed forces to open fire without warning on the protestors was effective in this. In parallel with these developments, CSTO stated that a peacekeeping force of 2500 people would be sent. The peacekeeping force that was formed with the participation of Russia, Belarus, Armenia, and later Kyrgyzstan arrived in Kazakhstan and started to exert control over the situation. As a result, the protests were suppressed, 5800 people were arrested, and 225 people (19 of whom were members of the security forces) lost their lives.

During the protests, founding President of the Republic of Kazakhstan Nursultan Nazarbayev, as an experienced statesman, stated that he retired from politics and laid down all his offices including the Chairmanship of the Security Council. Furthermore, three sons-in-law of Nazarbayev, who served as chief executive of QazaqGaz National Company, chief executive of National Chamber of Entrepreneurs, CEO of KazTransOil, resigned. Samat Abish, Nazarbayev’s nephew, was relieved from the post of the First Deputy Chairman of the National Security Committee.

In this way, what should have happened when the presidency passed to Tokayev was put into practice this time, and this uprising induced Nazarbayev to relinquish all his powers. Nevertheless, this issue needs to be approached cautiously. At this point, it should be noted that International Relations professor Henry Hale’s article (published in 2005) discussing the roles of elites in post-Soviet countries, including petro-mining company executives and media bosses, in the cyclical process of elite contestation and consolidation is eye-opening.[1] According to Hale, political change can take place in a cyclical manner rather than through purely progressive or regressive breakthroughs between democracy and autocracy. In line with the motivations of key political elites to maintain or advance their positions in patronage systems of states, where resources are transferred to certain groups, if a situation such as an economic crisis occurs, and perceptions are heightened that the president does not have the power to provide patronage and is not in a position to reward those who remain loyal and if these elites have expectations for another competitor who can win the succession struggle, they can play an important role in influencing the masses and trigger change by bringing forward the justifications of fighting against “autocratic methods" and "rooting out corruption." It is possible for a new patronage system to emerge as a result of this change, but this does not mean that there will never be a clear progress towards democracy in these countries. At this point, it is a fact that after former President Nazarbayev's withdrawal from the political scene, it is now Tokayev's responsibility to solve the problems that the people have been complaining about.

Although the sending of troops from the CSTO to Kazakhstan under the leadership of Russia raised some hesitations and doubts at the beginning, the announcement that the peacekeeping force would begin to withdraw in a short time and that the withdrawal would be completed within 10 days was met with welcome. As a matter of fact, the said force completed its task and withdrew from Kazakhstan.

Some observers reacted negatively to Russia's sending of troops to Kazakhstan and claimed that the Russian troops would not withdraw from Kazakhstan. It has been observed that some authors described Kazakhstan's refusal to seek help from the Organization of Turkic States (OTS) and its application to the Russian-led CSTO as a negative development for OTS. However, these are not accurate interpretations. There are two military organizations of which Kazakhstan is a member, these are CSTO and the Shanghai Cooperation Organization. On the other hand, a military cooperation is not included in the founding declaration or in the Vision 2040 document of the Organization of Turkic States. It is evident from these that the organization's working areas are primarily economic and commercial, and not martial in nature. Therefore, the view that Kazakhstan’s decision to not seek help from OTS is to the detriment of the organization is unfounded.

It is possible to say that Russia has benefited from the incidents in Kazakhstan. As Russian President Vladimir Putin has frequently pointed out with reference to the Ukraine conflict, Russia has once again demonstrated that it is the dominant power in the Caucasus and Central Asia and that it maintains its influence in these regions. It can be stated that Kazakhstan also stands as a beneficiary party. After all, Kazakhstan was able to get out of this crisis by preserving its independence, sovereignty, and territorial integrity. After this, if Kazakhstan can respond to the demands of its people and find a solution to the problems that caused this uprising, it will reach a position in which it can both ensure domestic stability and maintain its strong position in the region.