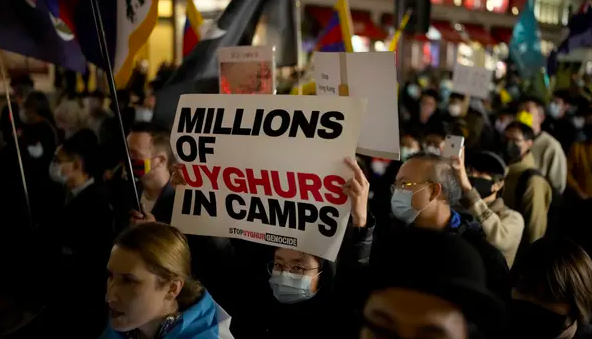 The human rights violations that the Uyghur people living in the Xinjiang region of China have been subjected to by the Chinese state for years has been brought to the attention of world opinion with the latest documents. In the light of the documents that emerged, the Uyghur Tribunal, an independent, unofficial people’s court in the United Kingdom, completed a year-long examination of China’s treatment of the Uyghurs and other ethnic minorities in Xinjiang, and concluded that China’s policies in the region were a form of genocide.[1]

These documents, called the ‘Xinjiang Documents’, reveal that the Chinese administration made statements that led to anti-human rights policies that directly affected the Uyghurs and other minorities in China.[2] There is information in the report that China follows a strategy of forced labor by deploying Uyghurs to collect cotton in Xinjiang, forcibly sterilizes Uyghur women in mass to suppress the Uyghur population, separates children from their families, and tries to destroy Uyghur cultural traditions. China has simply denied these allegations, saying that the repression in Xinjiang is necessary to prevent terrorism and root out religious extremism and that the camps are an effective tool to “re-educate” prisoners in the fight against terrorism.[3]

The court’s report provides evidence that crimes were committed against Uyghurs, including torture and the systematic suppression of births.[4] Although the UK-based Uyghur Tribunal, made up of lawyers, academics, and businessmen, does not have government support or powers to sanction or punish China, its members are committed to enforcing international action to combat alleged abuses against the Uyghurs.[5] The spokesperson of the Chinese embassy in London, on the other hand, described this tribunal, which he called “the so-called court”, as “a political tool used by several anti-Chinese and separatist elements to deceive and mislead the public”.[6]

The decision of the US House of Representatives with 428 votes to ban imports due to concerns about forced labor in Xinjiang, was also taken due to China’s persecution of the Uyghurs and other minorities. Chinese Foreign Ministry spokesperson Wang Wenbin, on the other hand, said that “the so-called forced labor and genocide in Xinjiang are completely fabricated rumors” and accused the United States of “using Xinjiang-related problems to spread rumors and engage in conflict under the guise of human rights.”[7]

Apart from that, last week the US Congress took aim at China for alleged human rights abuses against Chinese tennis player Peng Shuai, after she made an accusation that she had been sexually assaulted by a former government official and disappeared after her statement. The US approved a series of sanctions and drew attention to the decision of the United Nations to call for an investigation regarding the practices in Xinjiang. In addition, less than 2 months before the Beijing Winter Olympics, the US, the United Kingdom, Australia, and Canada announced their diplomatic boycotts against the Olympics due to human rights concerns.[8]

On the Chinese front, Wang, the spokesperson of the Chinese Ministry of Foreign Affairs, condemned the US sanctions as deviant acts. Wang called on the US to immediately withdraw the relevant wrong decision and stop interfering in China’s internal affairs and harming China’s interests. Wang also said at a press conference in Beijing last Monday that “If the US acts recklessly, China will take effective measures to strike back resolutely”.[9] China has even retaliated with a 28-page report called ‘Human rights violations in the United States’ in response to repeated sanctions from the US for human rights violations. The 28-page report, which touches on many issues from racism to income inequality, from the fight against the pandemic to social problems, emphasizes the shortcomings of American democracy.[10]

The European Union also drew attention to human rights violations and stated that it will try to mobilize 300 billion euros (340 billion dollars) in public and private infrastructure investments by 2027 to offer developing countries an alternative to China’s huge Belt and Road initiative. The strategy that the EU will use in doing this has been determined as the global infrastructure initiative called “Build Back Better World”, an agreement adopted at the G7 summit in July by the leaders of the G7 countries spearheaded by the US.[11] The Chinese authorities, who defend that the US and the EU use democracy as a weapon of mass destruction, continue to emphasize that democracy is instrumentalized and used to encourage division and confrontation.

As a result, although China denies human rights abuses in Xinjiang, the EU, the US government, and many human rights groups argue that Beijing is committing crimes there. China sees criticism from other countries regarding human rights violations as a plan to eliminate China in the global leadership race. Although China denies it, the latest documents are considered by most to prove the ongoing human rights violations against the Uyghurs and other Muslim Turkish communities. Within the scope of these documents, the British-based Uyghur Court calls for various measures and steps to be taken internationally, such as imposing additional sanctions on China, imposing import controls on products linked to Uyghur slave labor, and seeking public recognition that human rights violations have taken place in Xinjiang. The diplomatic boycott of the Beijing Winter Olympics by the UK, the US, Canada, and Australia, and the EU's effort to develop an alternative economic network to China’s Belt and Road Project can be perceived as indicators of the cold war between the West and China.

The situation of the Uyghurs, our cognates in East Turkistan, living in the region now known as Xinjiang, is naturally an issue that Turkey and the Turkish people deal with sensitivity. The point to be considered here is to ensure the security, stability, and welfare of the Uyghur people. The aim is to prevent these people from being crushed in the fight of elephants by making them the subject of an international political conflict. Turkey, which is located in the Western world, but pays attention to its relations with the People’s Republic of China and to the development of these relations, has to adopt a cautious attitude in this sensitive issue that seeks to overcome problems of the Uyghur people.