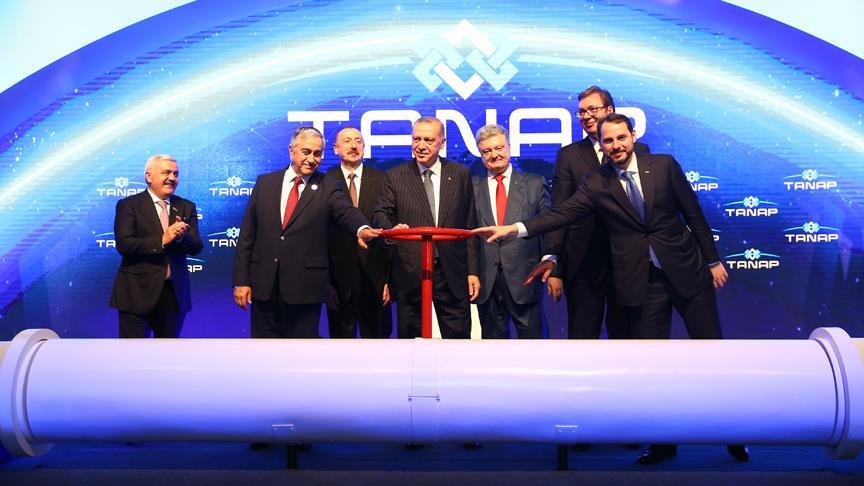 Trans-Anatolian Natural Gas Pipeline (TANAP) opened with a ceremony on June 12th, 2018 in Eskişehir[1] with the participation of President of Azerbaijan Ilham Aliyev, President of Serbia Aleksander Vucic, President of Ukraine Petro Poroşenko and President of the Turkish Republic of Northern Cyprus Mustafa Akıncı.[2] TANAP is one of the three projects in Southern Gas corridor (SGC) that extends from the second stage of Shah Deniz of Azerbaijan to Europe by linking to the planned Trans-Adriatic Pipeline (TAP). Therefore the opening of TANAP has been another critical addition to regional energy integration projects. It also reaffirmed the vision and commitment by Turkey and Azerbaijan, together with Georgia to provide alink between the emerging East and West. Thus the TANAP project can be seen as comlimantary to the Middle Corridor of BRI from a much broader perspective. It shows that the successful regional cooperation in the South Caucasus region has already proved efficient and effective with a vision that extends beyond the region to both east and west.

TANAP has already been linked with other projects when South Caucasus Pipeline Expansion (SCPX) which is the first leg of the SGC project became operational on May 29th. Through the SCPX, Baku-Tbilisi-Ceyhan (BTC) and Baku-Tbilisi-Erzurum (BTE) pipelines have become linked with the TANAP. Turkey has %19 stakes on SGC together with the SOCAR, BOTAŞ and BP.[3] With the completion of the TANAP, there is only one step left for the completion of the SGC project, ie.e Trans Adriatic Pipeline (TAP). When it becomes functional, the gas from Shah Deniz in the framework of the GGK project will reach Europe by 2020.

Initially six billion cubic meters (bcm) of the from TANAP has been planned to be used for Turkey’s domestic needs. This amount is equivalent to around 12% of Turkey's natural gas needs. After the addition of the TAP to the TANAP, it is predicted that 10 bcma gas can be delivered to Europe.[4] Thus, the dependence of Turkey’s gas imports on Russian gas would be reduced. It is planned that the gas flow to Europe will be increased incrementally with the completion of TAP. While 23 bcma of natural gas flow is planned in 2023, this amount is targeted to be around 31 bcma in 2026. [5]

As it can be remembered, NABUCCO Project also suggested carrying Azerbaijani gas from the Shah Deniz 2 through TANAP pipeline. But it couldn't get political and financial support as expected as. So Azerbaijan and Turkey established the SGC project on more pragmatic and realistic ground. They offered an alternative and more secure way for the transportation of Shah Deniz gas to Europe. Especially after the Ukraine Crisis and annexation of Crimea, TANAP gained much more support in the international area because of the increasing need on reliable energy routes. Under these circumstances, the first step of the project was taken on December 24th, 2011 by a signing memorandum of understanding between Turkey and Azerbaijan. TANAP project officially began on June 26th, 2012 with the signing of an intergovernmental agreement in Istanbul. The project of TANAP designed to run through 20 provinces of Turkey and it until it reaches at Greek border at İpsala. [6]  From this point, the TAP Pipeline will connect to convey natural gas to European nations. And thrilateral cooperation between the three of Turkey-Azerbaijan-Georgia and European Countries also will correspondingly be increased.