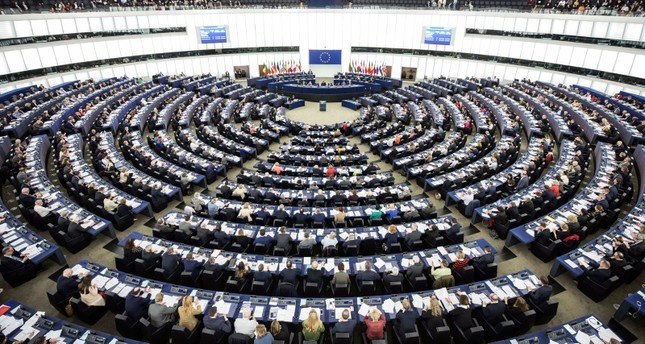 As it was stated in the last week’s Center for Eurasian Studies (AVİM) commentary on recent European Parliament (EP) resolution on Turkey, EP was adopted on 13 March 2019 in its plenary 2018 Commission Report on Turkey.[1]

First and foremost, the resolution in its paragraph 21 unabashedly “recommends that the Commission and the Council of the European Union, in accordance with the Negotiating Framework, formally suspend the accession negotiations with Turkey.” Moreover, nearly in all its paragraphs, it puts forward a posture that openly displays its biased, discriminatory and libelous attitude not only against the government but also the people of Turkey.

The Turkish Ministry of Foreign Affairs press release regarding the said resolution pertinently states that “We do not attribute any value to this unilateral and by no means objective stance of the European Parliament” and stresses that “the Resolution is deemed meaningless on our end.”[2] The Press Release also underlines that “The membership to the EU is a strategic objective for Turkey. The call to suspend the accession negotiations, which are the core axis of Turkey-EU relations, clearly demonstrates that the European Parliament lacks a visionary perspective and fails to respect the principle of ‘pacta sunt servanda’”.

In fact, the EP, apart from not respecting the principle of “pacta sunt servanda”, also does not take into account and respect the verdicts of the European Court of Justice.

Reference in the European Parliament Resolution to the 1915 events

One of the prominent examples to the attitude ignoring court verdicts is the reference in the resolution to the 1915 events that is based on one-sided Armenian narratives. The Resolution in its preambular paragraphs includes the wording of “having regard to… its resolution of 24 April 2015 on the centenary of the Armenian genocide” and via a footnote refers to the text of the said resolution.[3] Afterwards, in paragraph 32, “Calls on Turkey and Armenia to pursue the normalization of their relations; stresses that the opening of the Turkish-Armenian border could lead to improved relations, with particular reference to cross-border cooperation and economic integration”.

We find the text and the details of the debate on the 1987 resolution in the Official Journal of the European Commission.[5] According to the Journal, the rapporteur of the topic of the “Armenian question” was Belgian Parliamentarian Mr. Vandemeulebroucke.[6]

It is quite remarkable that regarding the voting of the resolution, the Journal in page 95 includes the following paragraph:

“The next item on the agenda was the vote on the motion for a resolution contained in the Vandemeulebroucke report (Doc. A 2-33/87) (2).

Mr Wedekind said that he had received death threats from Armenians in Strasbourg that day.”

A short scan on the internet indicates that Mr. Rudolf Wedekind was a German politician from CDU and member of EP from 1981 to 1989. In order set the records straight for the future works on the subject of European Parliament decisions on 1915 events, it is quite opportune to mention here below the following quoted passages from the article written by Pulat Tacar titled “The Tale of European Parliament's 1987 Resolution” published in the AVİM Journal of Review of Armenian Studies in 2005:

“On 18 July 1987 the European parliament was encircled by Armenians, coming from various locations. One evening the groups of Armenians who went down town placed up notices at the corner of every street. The French police took no measures. Very few parliamentarians had participated in the session. During the Parliament’s session, the French parliamentarians who ascended a platform that was placed outside, explained what was going on inside to those demonstrators waiting under the rain. They applauded those who supported the Armenian thesis and heckled those who did not. The terrorists that seeped into Parliament threatened certain parliamentarians, for example when German Wedekind had the floor he disclosed that he had been threatened with a gun, that this was a scandal and stated that under these conditions this matter could not be dealt with. French parliamentarian and member of the Socialist Group Miss Pery, who was deliberately chosen to hold the presidential chair of that session, turned a deaf ear on these developments”[7]

The operative paragraphs 3 and 4 of the 1987 EP resolution which we understand were adopted under threats are as follows:

“3. Calls on the Council to obtain from the present Turkish Government an acknowledgement of the genocide perpetrated against the Armenians in 1915-1917 and promote the establishment of a dialogue between Turkey and the representatives of the Armenians;

4. ” Believes that the refusal by the present Turkish Government to acknowledge the genocide against the Armenian people committed by the Young Turk government, its reluctance to apply the principles of international law to its differences of opinion with Greece, the maintenance of Turkish occupation forces in Cyprus and the denial of the existence of the Kurdish question, together with the lack of true parliamentary democracy and the failure to respect individual and collective freedoms, in particular freedom of religion, in that country are insurmountable obstacles to consideration of the possibility of Turkey's accession to the Community;"

On 9 October 2003 two French citizens (Gregoire and Suzanne Krikorian) and The Euro-Armenia Association in Marseilles represented by lawyer Phillipe Krikorian lodged an application to the European Court of Justice “for compensation for the non-material damage suffered by the applicants on account of, inter alia, recognition of Turkey's status as a candidate for accession to the European Union, although that State has refused to acknowledge the genocide perpetrated in 1915 against the Armenians living in Turkey” and claimed that the Court should:

In the verdict of the Court it is mentioned that “In a separate document, lodged at the Registry of the Court of First Instance on 9 October 2003, the applicants applied for interim measures seeking, in particular, suspension of the procedure for examining the Republic of Turkey's candidature for accession to the European Union by the defendant institutions and asking that resumption of that procedure be made conditional on prior acknowledgement by that State of the abovementioned genocide.”

The Court verdict, as findings, underlined basically the following:

18. As regards the fact that the Republic of Turkey enjoys a European Union accession partnership, the applicants rely on the argument that the conduct of the defendant institutions is unlawful because it is contrary to the 1987 resolution.

19. It suffices to point out that the 1987 resolution is a document containing declarations of a purely political nature, which may be amended by the Parliament at any time. It cannot therefore have binding legal consequences for its author nor, a fortiori, for the other defendant institutions.”

The Court ordered in paragraph 27 that “the claims for compensation are manifestly unfounded” and declared its decision as follows:

“On those grounds, THE COURT OF FIRST INSTANCE, hereby orders: 1. The action is dismissed. 2. The applicants shall bear the costs. Luxembourg, 17 December 2003.”

Appeal of the claimants also rejected by the court

Upon this decision aforementioned two French citizens (Gregoire and Suzanne Krikorian) and The Euro-Armenia Association in Marseilles represented by lawyer Phillipe Krikorian lodged an application for appeal to the European Court of Justice.

The Order of the Court (Fourth Chamber) dated 29 October 2004 appeared in the Official Journal of the European Union as follows. “1. The appeal is dismissed. 2. The appellants shall bear the costs of the appeal.”[9]

At this point, it is appropriate to remember the comment made by the Founder and Honorary President of the Center for Eurasian Studies (AVİM) Ambassador (R) Ömer Engin Lütem who passed away on 6 January 2018 on the said verdict:

The European Parliament with its latest decision did not surprise us. It ignored the European Court of Justice verdict and continued to demonstrate its biased, blatantly prejudiced attitude against Turkey and the Turks. We will keep our resolve for the truth to become acknowledged.

In the meantime, as things stand out in Europe and the European Parliament in the short term, it will be befitting for an EU with such a parliament to have a president in the of person of the Christian Social Union in Bavaria politician Manfred Weber.

[5] Pulat Tacar, “The Tale of European Parliament’s 1987 Resolution Entitled: 'Political Solution to the Armenian Question',” Review Of Armenian Studies 3, no. 9 (2005): 52. Retired Ambassador Pulat Tacar describes this parliamentarian in the following way: “Belgian Parliamentarian Mr. Vandemeulebroucke who, at that time, was a member of the Vlamski Block party known for being extreme-rightist, nationalist and racist. I invited Vandemeulebroucke for lunch in the days following his appointment as a reporter in January 1985.”