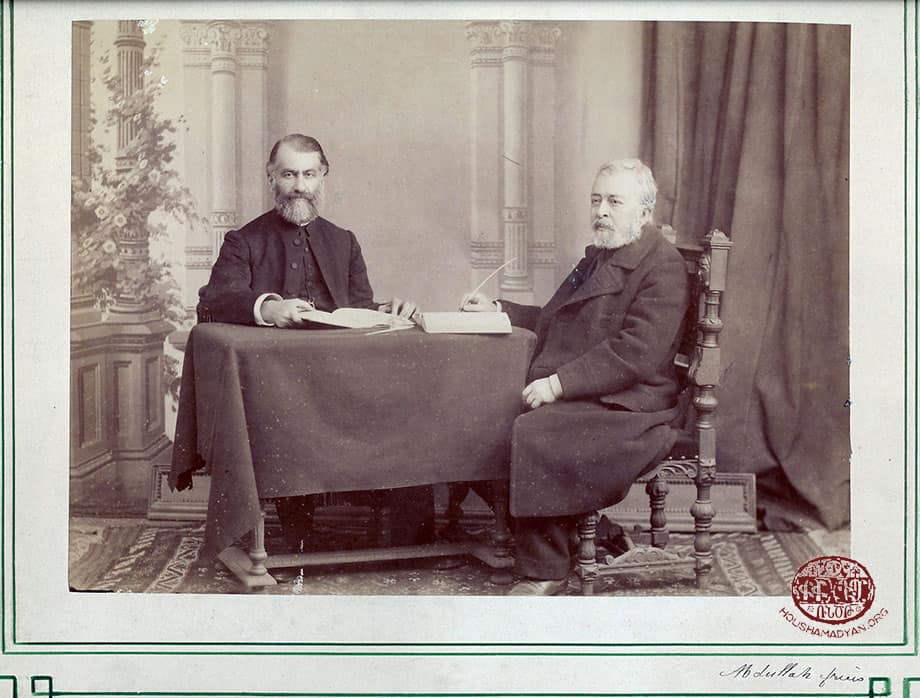 According to the brief biography on the website of the Armenian Eastern Prelacy, which is included below, Madatia Karakashian, who was born in 1818 in Istanbul as Anton Berberian, is considered as a pioneer of Armenian critical historiography. He stood out with his rejection of historiography based on popular legends. It is expressed that Karakashian left an imprint on Armenian scholarship during the nineteenth century. Armenian historiography, Classical Armenian, philosophy, geography and scientific materialism were amongst Karakashian’s interests in his life of scholarship.

Karakashian completed his elementary education in Istanbul. He was sent to Vienna when he was young. During his time in Vienna, he was a member of a monastery, a member of a congregation, a university student and a priest. Moreover, he began an academic career.

After living in Vienna for a long time, he moved to Izmir and gave lessons at a local Mekhitarist school. As a result of him adopting scientific materialism years later, Karakashian renounced his religious vows and moved to Istanbul, where he devoted himself to teaching and scholarship. In 1895, his book titled Critical History of Armenia, which was considered to be his most significant work, was published in Tbilisi. This work became prominent by attempting to present a history of Armenia based on a critical approach to sources and establishing a connection with the political and social relations of Armenia until the fifth century A.D.

As seen from the brief biography, Karakashian was a striking case in respect to exemplifying the Armenian populations’ conditions of living and freedom under Ottoman citizenship and rule. After he freely conducted his religious and scholarly activities abroad, he continued his life in Istanbul and Izmir and became a lecturer as a regular non-Muslim citizen. He gave lessons at the Armenian schools in Izmir and Istanbul. Karakahshian’s life story can constitute an example against those who want to cultivate the seeds of enmity thrown between the Turks and Armenians with regards to true historical background.

A pioneer of Armenian critical historiography, Madatia Karakashian was a prolific author who left his imprint on Armenian scholarship during the nineteenth century.

He was born Anton Berberian in Constantinople on February 11, 1818. He received his elementary education in his birthplace, and in 1832 he was sent to the Mekhitarist Monastery in Vienna. After four years of study, he joined the congregation in 1836. He graduated from the University of Vienna and became a celibate priest in 1844.

He started his career in the 1840s, publishing two books, The Art of Rhetoric (1844) and Description of Studies (1845). In the latter, he set his principles for the study of history. He rejected the historiography based on popular legends and highlighted the imperative for a critical approach.

In 1848 he went from Vienna to Smyrna, where he taught at the local Mekhitarist School. Under the influence of German philosopher Ludwig Büchner’s scientific materialism, which he espoused in 1855, a year later Karakashian renounced his religious vows. He moved to Constantinople, where he devoted himself to teaching and scholarship.

Some of his works of grammar had between eight to ten reprints between the 1860s and the 1890s. He would produce several works of philosophy, of which the most important was Principles of Logics (1864), where he condensed his materialist views.

He took a position at the Bible House as editor of translators and simultaneously he taught Classical Armenian, of which he had unparalleled knowledge, at the Armenian schools of the city. In 1887, along with his colleague Hagop Kurken, he published the periodical Jashag vosgeghen tbrootian (Taste of Golden Literature), written entirely in Classical Armenian of the fifth century.

In the 1890s he started teaching Classical Armenian at the newly founded Getronagan School. He also published a collection of geography textbooks. In 1895, he published in Tiflis his most important work, Critical History of Armenia, which was the first attempt to present a history of Armenia based on a critical approach to sources and establishing a connection with the political and social relations of Armenia until the fifth century A.D.

He passed away in Constantinople on November 26, 1903.